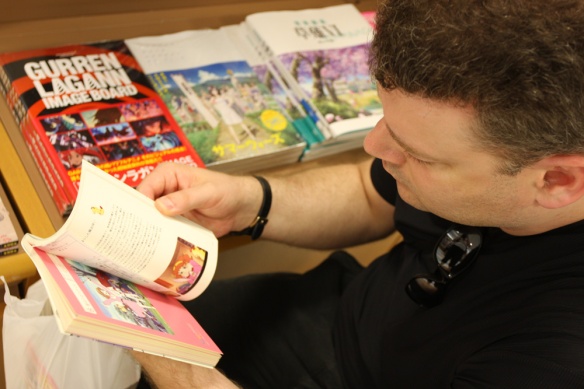 For several years, I have been writing a column in Neo magazine called Manga Snapshot. Every month I take a different Japanese comics anthology magazine and literally take it apart, examining everything from the paper quality to the adverts. There are so many comics magazines in Japan that despite running now for four years, Manga Snapshot has yet to repeat a title. I’ve covered all the usual magazines for boys and girls and housewives, and the usual niches like romance and war comics, but also weirder areas. Detective stories for lonely Goths, educational golfing magazine containing nothing but manga about golf, a magazine entirely devoted to mahjong… several of these were reprinted in the Schoolgirl Milky Crisis book, and in the event that there is a Schoolgirl Milky Crisis 2, there will be many more of them.

I’m in Japan at the moment and trying to stock up with enough new titles to see the column through to the middle of next year. It’s a rare convenience store trip that doesn’t see me uncovering yet another unexpected title. Today alone, I stumbled across a monthly magazine series dedicated to reportage of “funny stories that really happened” to the readers, and another concentrating solely on gory retellings of fairy stories. I’m still looking for the monthly magazine aimed directly at the wives of absent military personnel.

I love writing Manga Snapshot. It forces me to keep very close tabs on what’s going on in the Japanese comics world, but also to read around the stories. I’ve found myself investigating the adverts, reading the editorials, and stumbling across truly obscure sub-genres like the noodle bar reviews, where cunning manga creators even turn their lunch-breaks into tiny tax-deductible slice-of-life accounts of what they ate, complete with comic recreations of their meal, a cameo from the shop owner, and maps to find each featured cafe. It’s an amazing glimpse of moments in modern Japanese life that are often only a few weeks old, about eateries that you can literally go and find yourself.

A recurring gag in my Manga Snapshot columns involves me reading my horoscope, which is invariably bonkers, but tailored to the peculiar interests of each magazine’s readership. I think I’m going to steer clear of the one in Scary Fairy Stories, though, which seems to think that I might be eaten by a wolf.