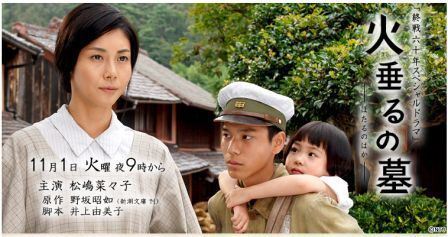 Isao Takahata’s Grave of the Fireflies is one of the pinnacles of modern anime, and arguably the greatest of the war-story sub-genre. Its live-action TV remake is, well… a travesty. Made in 2005 to mark the 60th anniversary of the end of the war, this NTV drama special plays not as an adaptation of the original novel, but as a homage and commentary on the anime classic.

The story is familiar to all anime fans: war orphans Seita and Setsuko starve to death in the ruins of wartime Kobe, their tale told in flashback as a comfortable life is eroded by deprivation and neglect. Left homeless by bombing raids, abandoned by their relatives, they enact a tragic parody of home life in a secluded forest, before succumbing to a heart-breaking, quiet demise. The story was all the more poignant for its semi-autobiographical quality, since original author Akiyuki Nosaka lost one of his own sisters to malnutrition shortly after the war.

This TV special seems to have been made with an audience of 80-year-old women in mind, tugging blatantly at the heartstrings of the old, and their hope to impart something of their own experience to the listless young. Or rather, it exploits Japan’s Confucian insistence on respect for the aged, and couches the entire story with the rambling perspective of an octogenarian, as if this element alone will force the audience to pay respectful attention. It is certainly unlikely to impress anyone who can still remember what day it is, shot largely on small sets with matte backdrops, and with an enthusiastic faith that a few dots of green SFX will make everyone think they are surrounded by fireflies.

Thanks to a ham-fisted opening with multiple flashbacks, there are about five points of view, but the point of view is supposed to be that of the starving children’s aunt Hisako. Depicted as an unpleasant harridan in the anime, here she is played by Japanese everygirl superstar Nanako Matsushima. Effectively, the live action Grave of the Fireflies runs through all the landmark scenes of the anime, and throws in an additional hour or so of footage that attempts to put the aunt’s point of view. She, too, has her problems, you see. She, too, has hungry mouths to feed. She, too, has lost someone. Seita and Setsuko bang on her door whining for assistance scant moments after she has received official notification of her husband’s death; a persuasive argument for the rehabilitation of one of anime’s great baddies.

The result is, if you want to be unkind, a tragic variant of Life of Brian, with a famous, familiar story unfolding at the periphery, while the camera inexplicably focuses on a bunch of slack jawed morons who have a minor stake in proceedings. The Japanese DVD includes a trailer, cut to recall all the iconic moments of the anime, but replayed with the live characters. Whisk through the images fast enough and it’s possible to miss the pedestrian framing, the sheer cleanliness of the sanitised apocalypse, and the bizarre way in which so many cramped Kobe tenements seem to have massive lounges and be almost entirely free of clutter.

The casting of Nanako Matsushima seems like a calculated effort to recall her attempt at epic drama in 2000, the multi-generational 100 Years. In fact, this Grave of the Fireflies could almost function as a missing chapter from that saga, in which Matsushima played a series of unfortunate women in the 20th century. She does her best with the thin material, but manages to make it through wartime deprivation with what appears to be a giant bucket of Shiseido foundation within arm’s reach. At the end, well, as it happens, at the beginning (see above regarding the ham-fisted opener), Matsushima rushes to the children’s rescue at the train station, only to discover that she’s too late, and that their iconic can of cough drops is lying on the rubbish heap.

“You killed them,” hisses her daughter accusingly, and Matsushima dutifully blubs for the camera. The first of several twee piano noodlings kicks off, and we enter another flashback, not to be confused with the previous flashback that brought us here.

Bad acting is an inevitable part of Japanese life – often, real-world etiquette and face-saving practically requires it. But so many Japanese TV directors fail to realise that film acting is about appearing as if you do not know that a camera is watching you. The cast mug and twitch and grimace, state the blindingly obvious to each other, and drag themselves through the overlong scenes. The result only serves to accentuate the achievement of Isao Takahata’s anime, which runs rings around this poorly performed pantomime. But where lies the blame? The anime Grave was a movie intended for cinema theatres. This version was cranked out with the low, low budgets and minimal expectations of Japanese TV. One wonders about its intended audience, and ends up picturing a chaotic family gathering at an old peoples’ home, where the glacial pace and lachrymose grandstanding might be regarded by some viewers as a welcome change from the jump-cuts and strobing of modern telly.

The script is actually fine, and does have some nice ideas, like the way that the idyllic countryside of the 1940s is shown to have been transformed into charmless 21st century jumble of storm drains and apartment blocks. But that’s already a Ghibli staple; it’s not like it hasn’t been done loads of time before, and the juxtaposition of old and new Kobe was the whole point of the closing shot of the anime. The language spoken is crystal clear, very easy to understand (I have recently spent a day straining to make out 40-year-old Astro Boy audio, and this was a delight in comparison), and sprinkled liberally with Kansai area dialect, although the film-makers have such little faith in audience intelligence that everyone repeats themselves in standard Japanese, as if the cast of EastEnders wandered around saying “Thank You Thanks Ta” to each other.

However, the drama is shot throughout with a worthy, sanctimonious desire to EDUCATE its viewers, earnestly drumming it into our brains that there were People In the Past Who Were Just Like Us, although hopefully few of us are like the sullen contemporary teenage girl included as a point of identification for younger viewers. “The war is not a fairy tale,” she eventually intones sagely, before beginning her callow musings on What it All Means, and ending with an observation with all the intellectual depth of a party balloon.

Since this has hardly been troubling the sales sheets of foreign distributors, I wonder if the Japanese have already given up on selling this curio to fans outside Japan. Perhaps its best chance might come as an extra on a Blu-Ray of the Takahata classic. If someone had a Collector’s Edition of the anime, this two-hour TV movie, however disappointing, would be a fantastic bit of bonus content, and people couldn’t complain that they had wasted their money, as it was “free”. But with the cost of subbing it, certifying it and sticking it on the package, not to mention the cost of rights acquisition from the usual suspects, I doubt if it will ever turn up in the English language. Then again, stranger things have happened. If it gets bundled in a package with another film that a distributor genuinely wants, someone may find themselves releasing it almost by accident.

Jonathan Clements is the author of A Brief History of Japan.