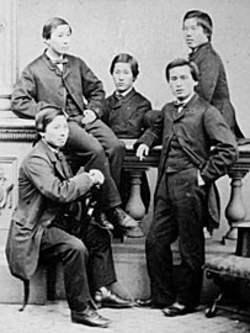 For the sixth year, the Japan Foundation is mounting a cinema mini-tour of Britain, dropping in on London, Bristol, Belfast, Sheffield and Edinburgh with a selection of new films from Japan.

Sho Igarashi’s Choshu Five is my pick of the bunch, not because it’s a film that’s going to set the world on fire, but because it’s one of those movies that zeroes in on an incredible, forgotten corner of history. In 1863, when it was still illegal to leave Japan, a group of youths from the fractious southern domain of Choshu sneaked out of the country disguised as English sailors. After working as deck-hands on a steamer, they studied in the baffling, alien metropolis of London. On their return to Japan, all went on to become famous figures, counting two future prime ministers and the “father of the Japanese railways” among their number.

Today, despite being national figures in their home country, the Five are unknown in the UK, commemorated by an obscure Japanese-language monolith in the grounds of University College London. The movie brings them back to life as sullen samurai boys, and then as top-hatted Victorian gents, getting to grips with the weird world of exotic Europe. It’s not the greatest film ever made, but is still a diverting curio of the 19th century, well worth celebrating in this 150th anniversary year of UK-Japan friendship.

You can find out where the film is playing in the UK here:

And I should also note that on 13th February at the Japan Foundation in London, Andrew Cobbing will be giving a lecture on the real-world Choshu Five, and how they fit into their world and times.

5 thoughts on “The Famous Five”