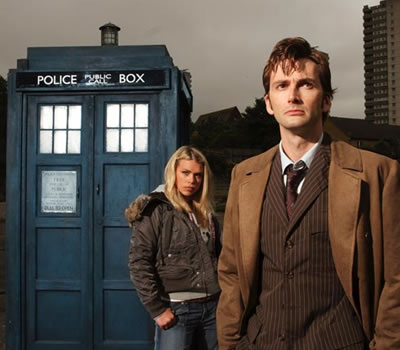 Since so many English-language programmes are dubbed in Japan, the voice-acting industry is much better established than in the UK. This has led to an international variant on stunt casting, whereby certain actors can trade off the reputation of the Hollywood stars whose voices they replace. NHK has done a superb job of translating British sci-fi caper Doctor Who into Japanese, with former Fellowship of the Rings translator Katsushige Hirata handling the script, alongside a string of notables from the voice-acting world.

Tenth Doctor David Tennant is voiced in Japanese by Toshihiko Seki, whose most prominent recent live-action appearance was voicing Arthur in the recent Mists of Avalon series. His has dubbed both Pierce Brosnan in Remington Steele and Johnny Depp in Edward Scissorhands. Often typecast as suave, dapper and youthful, Seki’s anime roles include Alexander the Great in Reign: the Conqueror and a cameo as Asuka Langley’s father in Evangelion.

The 45-year-old Seki takes over from the voice actor playing 9th Doctor Christopher Eccleston in season one – 53-year-old Kazuhiro Yamaji, whose soundalike achievements include Christopher Walken and Al Pacino. In the anime world, Yamaji has played roles in Master Keaton and Case Closed, but is better known outside cartoons, not only for his physical appearances in many live-action serials, but for his powerful performance as Wolverine in the Japanese X-Men movies.

Meanwhile, Billie Piper’s Rose Tyler is replaced in Japanese with the voice of pop idol Maaya Sakamoto, who has spoken Natalie Portman’s Japanese lines on several occasions, as well as starring in anime such as Escaflowne and Wolf’s Rain. 51st century time traveller Captain Jack Harkness is played in Japanese by Takuma Takewaka, voice of both Eric Delko in CSI: Miami and Kyosuke Takahashi in Initial D. And in the coolest casting decision of all, Sarah Jane Smith is played by Fumi Hirano, the smooth and sexy voice of Lum, the invader girl from 1980s anime classic Urusei Yatsura.

However, not everything has gone according to plan. Broadcast in a relatively late-night slot, Doctor Who has mystified adult viewers who do not realise it is a children’s show. And on Japanese SF message boards, uncouth posters have been taken aback by some of the cast.

“Billie Piper is so fat,” opines one pundit, “and she has a face like a hippo.”

“Ah,” answers another. “That is because she is English.”