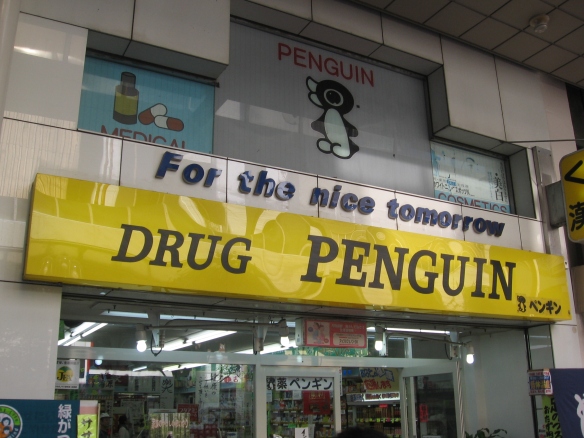 When I was a child, I imagined that Sendai was the headquarters of a vast satanic conglomerate called Muramasa Industries, which spanned the globe and several neighbouring dimensions in a bid for mastery of the universe. In 1987, I wrote my Geography O-level paper on the little-known Muramasa Steelworks in Sendai, which I had entirely made up (it did not help that I accidentally drank a bottle of sake before going into the exam — I got a B, thanks for asking). When I left Japan in 1992, I told the immigration clerk that I was sure to come back, “because I haven’t been to Sendai yet”. I have always imagined that Sendai would be a really cool place. And now, more than twenty years after I began imagining what Sendai was like, I am finally here.

Nothing quite prepared me for the locals. The men are taller than the average Japanese; the women leggier. Everyone seems to have grabbed whatever they could find from the dressing-up box that morning. I swear to God, a woman on a bike just rode past me wearing a pirate hat, skull and crossbones and all. There are the usual Gothic Lolitas, but bizarre fairytale concoctions, men dressed like rock stars, lots of kinky boots, and trilbys at jaunty angles. Even Mrs Clements thinks they dress weird, and she is the inventor of the poncho-and-hotpants combo.

Meanwhile, all the local subway stations play a loop of Holst’s “Jupiter”, include “I Vow to Thee My Country” which half the Sendai natives seem to have as a ringtone on their mobiles. Maps in the train stations playfully have south at the top, but only on random occasions, as if deliberately designed to confuse visitors. Today I had lunch in a bar with a built-in dress shop, that was playing a drum-and-bass remix of Jeff Wayne’s War of the Worlds. Over the road, there was an ominous advert for an Evangelion-themed bar. The whole place seems to me to be as if born from the notebook jottings of a deranged 15-year-old role-playing gamer. There is even a Muramasa Industries in Sendai, although only in the sense that when I formed a limited company to handle my copyrights, I named it so. Since I am here and I am my company, the circle is complete and fiction is become fact. Perhaps now the stars will start to go out.