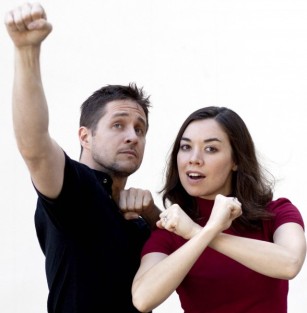 “Actors,” said Alfred Hitchcock, “are cattle.” You control them with a pointy stick. You tell them where to stand. You leave them in a field all day, chewing regurgitated grass. You pull on their teats when you need a drink. No, I am not entirely sure where he was going with that. But actors should definitely do what they’re told, otherwise how will the director’s vision make it to the audience? Actors are the vital conduit between text and audience. And they make empty, melancholy mooing noises with bovine regularity.

I have had to sit, powerless in a studio, while actors droned on about how I had made factual mistakes in my script for their bewilderingly popular, 30-year-old franchise. In the recording booth, I reminded the director that we had copies of the DVD on site that would prove the actors wrong. He shrugged and said it was too much trouble. It was then I started wishing for a cattle prod.

The voice-acting world has bizarre traditions and enclaves of its own. There are a dozen Canadians in London who get to do most of the “mid-Atlantic” voice work, merely because they’re the closest thing we often have to real Americans. In the anime world, there is a stand-off between union and non-union roles, and a whole subsidiary industry of conventioneering nomads, travelling from place to place to talk about their work. Some of them are nice people with interesting things to say. Some are not.

The writer is king in his little head, for as long as he is typing alone. Once the script reaches the studio, it belongs to the actors. Get used to it. Over the years I have learned to write scripts that are more open to interpretation, that allow the actors freer rein. I suppose it’s because I trust them more now. I understand that on the day they have my script, it is theirs, and that I should credit them with the talent to do it justice.

The joys outweigh the miseries. I have listened as an actress took something I had written and utterly transformed it, adding nuances of her own, reading every line just as I had intended, but then adding tiny moments of unexpected comedy, pathos and character. She took it to new heights, and she made it indubitably her own. Her name was Sheridan Smith, and she made me sound a lot smarter than I really was. 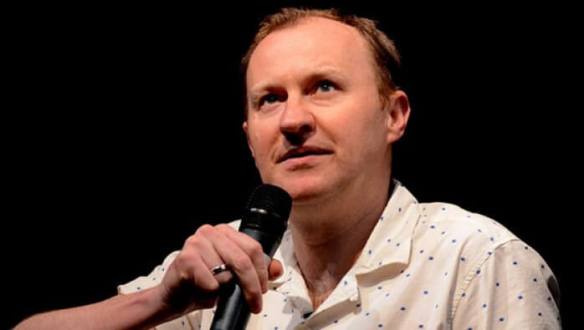 Those memorable little snickers from Mark Gatiss when he plays the Master in my Doctor Who Unbound: Sympathy for the Devil? They weren’t scripted; he put them in himself. That filthy Scottish slang from Middenface McNulty in Strontium Dog: Down to Earth, largely invented by Mark McDonnell, who is a filthy Scot. That comedy snort from Johnny Alpha when he wakes up in Strontium Dog; Fire from Heaven, put in there by Simon Pegg, who is a comedy snorter. The decision to play the bad guy with the voice of Sean Connery in my translation of Kekko Kamen – all down to Rupert Degas. But don’t tell anyone; I am happy to take the credit for their decisions, as long as I look good.

One of my best-known scripts is a thing called Judge Dredd: Solo, in which the man of a thousand voices, Tony Longworth, played every single role. Alien traders knitted from wool, green-skinned Betelgeusian flunkies, an entire bar-room full of drunken labourers. Everyone. It was Toby who decided to read the shipboard computer in the voice of HAL 9000; Toby who made a MegaCity Judge sound like Humphrey Bogart. In the penultimate scene, as the Solo – a dying, shape-shifting alien on the run – made its last-ditch attempt to escape through Immigration Control in a city of the future, I wrote my favourite ever voice direction:

“Solo replies, in the voice of Toby Longworth.”

Had I ever heard Toby’s voice before? His real voice? He’d been a thousand different people in my presence, but never himself. I love that – just for half a page, you get to hear Toby be himself. It’s pretty much the only time you will.

I’ve had to learn how to deal with actors the hard way, by being locked in a studio with them for hours on end while they bitched about their agents, embarked on mutually destructive love affairs, and tried to outdo each other with on-set gossip. My life would have been a lot easier if I’d had a copy of Voice-Over Voice Actor by Yuri Lowenthal and Tara Platt.

I’ve known Yuri Lowenthal for 18 years, ever since we were students at a college in Japan. He used to wear a bomber jacket adorned with a shoulder patch that read “Oni”, the Japanese word for Demon. I once had to peel a tramp off him in Osaka, who thought he was a USAF pilot. The guy wasn’t attacking him; he was worshipping him, wanting to shake his hand, mumbling “USA NUMBER ONE” over and over again, while Yuri cringed in embarrassment.

Fifteen years later, in London, we picked up where we left off. Somewhere, he had found a wife, Tara Platt. Like most actresses, impossibly attractive. Unlike many actresses, endlessly inquisitive. She has an improviser’s ability to turn any random question into the seed of the next performance. She notices gaps – in stories, in knowledge, in situations – and wonders aloud how to fill them. Do that in a room full of actors and watch them rush to oblige. Somehow she got me and Yuri to re-enact the Gilgamesh epic for her outside a restaurant in Camden. She drew out of me my entire, meagre supply of memories of Yuri’s late father, who she’d never met. I say this with every intention of it being a compliment (although in the acting world it is not). She thinks like a writer.

Who better, then, to work on an insiders’ guide to the voice-acting world, from commercial voice-overs to talking books, anime dubbing to playing characters in games? Warm-ups and breath exercises, self-promotion and in-studio hygiene, they’ve examined the field from every conceivable angle.

They have mined the voice-acting industry for anecdotes and information, chasing down vital tips and nuggets of knowledge that can help everyone in the business. Not just performers – there are writers and directors who can learn something from their witty observations and no-nonsense descriptions of actors at work, at play, and in search of that next recording gig.

Lowenthal and Platt delve deep into the world of voice acting, with stories from behind the mic and trenchant observations from fellow performers. They bust the jargon-packed world of loop groups and walla work, voice matching and phone patching. They have produced an excellent roadmap of the surprisingly wide world of vocal performance, including unexpected areas like studio socialising, the ethics of networking, audition tips, and even health and hydration. The result is an invaluable guide to professional voice acting, from two of its leading stars.