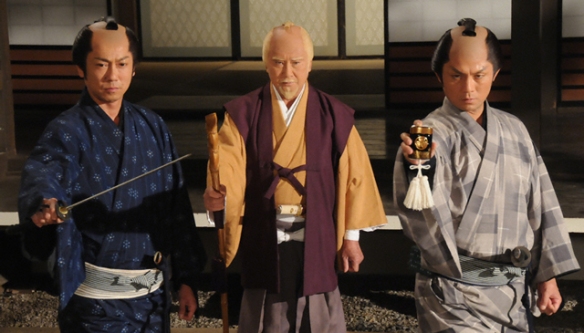 I wander a traditional Japan of backstreets and stone lanterns, with wooden buildings and paper walls. I think I took a wrong turn somewhere by the blacksmith’s, and need to retrace my steps if I want to get back to the pleasure quarter. As I head back towards the Yoshiwara, I bump into a samurai leading two associates across a stone bridge. We bow at each other curtly and he rustles onwards with a scowl. The lower-ranking lieutenant behind him rolls his eyes at me playfully, pointing at his sullen associate as if to say, “Bad Agent Day.”

Toei’s Kyoto studios, a series of nondescript warehouse buildings in a long line by the railroad tracks, is closed to the public, but literally anyone can walk in off the street to wander the neighboring Movie Village backlot. Comprising several blocks of period housing, the Movie Village stretches from a Victorian-era town square complete with trams and coffee house, to a sector of samurai-era Tokyo that includes an attractive replica of Nihonbashi bridge, a pleasure quarter, merchant housing, a courthouse, and a prison. Wait for a gap in the milling school children and tourists, and the opportunity presents itself for a snapshot of the Japan of two centuries ago — a situation helped greatly by the many samurai, artisans, and geisha wandering the lot in full costume.

The Movie Village isn’t so much a theme park as a working studio. Sure, there’s a museum to the Power Rangers and their greatest enemies, some of the houses have been turned into snap joints where you can have your photo taken in samurai get-up, and there’s a ninja booth where you can throw shuriken at targets to win prizes, but all the minor attractions play second fiddle to the Movie Village’s true function, as a giant location set for samurai dramas.

Attend the Movie Village on any given day, and you can easily find that the courtroom area has been cordoned off to shoot a finale for next season’s Toyama no Kinsan. Don’t bank on always seeing the robotic sea monster that pops out of the SFX lake, since there remains an eternal possibility that it will have been turned off for the day so that someone can film a dockside sequence for Ooka Echizen. On the day I’m there, they are recording the latest episode of Mito Komon, a series that has been running intermittently since 1969. Mito Komon is the apocryphal tale of Tokugawa Mitsukuni, uncle of the Shogun Tsunayoshi, who wanders seventeenth-century Japan in disguise, observing criminals as they prey on the innocent. At the right moment towards the end of each forty-five-minute episode, Mito’s retainers will stop proceedings and brandish the Shogun’s seal. They point at the unassuming old man and bellow: “Don’t you know who this is!?” and Mito throws off his disguise.

A runner with a loud speaker tries with increasing panic to control a group of bewildered kids from San Francisco, who still think this is your average run-of-the-mill theme park, and don’t understand why they can’t cheer every time the samurai on the other side of the square fight each other.

There is a rustle among the Japanese crowd and a series of excited “Ooohs!” as a man in peach-colored robes and a white goatee rides onto the set on a small silver scooter ready for his next scene. It is Kotaro Satomi, the latest of several actors to play Mito Komon, who has been with the series for so long that he also played one of Mito’s young companions during the 1970s and 1980s. He stares in bewilderment at the San Francisco school kids, who stare in bewilderment back. As the seconds tick by, it becomes obvious that if someone were to brandish the Shogun’s seal at this moment and ask the 64,000 yen question, these kids wouldn’t have the faintest idea who he was.

“This man is very famous,” explains their tour guide desperately. “He’s a very famous actor who plays a very famous person in a very famous series.” He says this all with the characteristic vagueness of many Japanese tour guides, who have long since given up trying to get foreign tourists to remember people’s actual names.

The Americans nod excitedly and immediate start demanding to have their pictures taken with Satomi. Perhaps realizing that this is celebrity snapshots for the sake of it, and that none of them know who he really is, Satomi agrees with a weary smile. But he has the magnanimous charisma of a true professional, and the tourists go away happy, ready to tell all their friends that they met “someone really famous” while they were in Japan, and that he was “really nice”, whoever he was.

The peak rating for Mito Komon is 43.7 percent — a night in 1979 when almost half of all the TV sets in Japan were tuned to the show. Satomi knows that there are already plenty of people in Japan who know exactly who he is. San Francisco’s chance will have to wait.

This article first appeared in Newtype USA, July 2003, and was reprinted in Schoolgirl Milky Crisis. Mito Komon finishes its decades-long run on Japanese television this month.