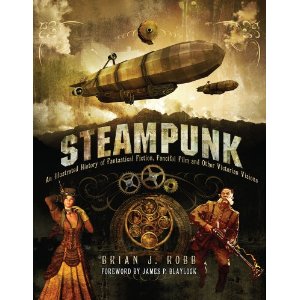 Out today, Brian Robb’s new book Steampunk: Victorian Visionaries, Scientific Romances and Fantastic Fictions, notable among a slew of lesser works on the sub-genre by devoting a whole chapter to its Japanese manifestations, which include Japan-only spin-offs from the John Carter series, Rhett Butler running guns to the Shogun, Emily Bronte in a time machine, and a novel called simply Steampunk! which has trains in it. And dinosaurs. Another possibility for your Christmas stocking, perhaps…?

Quoth the blurb: “Simultaneously a literary movement, ultra-hip subculture and burgeoning cottage industry, Steampunk is the most influential and arresting new genre to emerge from the late twentieth century. Spinning tales populated with clockwork Leviathans, cannon-shots to the moon and coal-fired robots, it charts alternative histories in which the British Empire never fell or where the atom remained unsplit. A term first coined in 1987 by science fiction author K.W.Jeter, Steampunk was born of myriad influences: the classic scientific romances of Jules Verne, H.G. Wells and Mary Shelley, a growing nostalgia for Victoriana and an ironic reaction to the dystopian futurescapes of Cyberpunk. Today it has grown to become a global aesthetic, making its mark on art, architecture, fashion and even music. This wide-ranging, beautifully-illustrated and much needed history explores the genre’s many intricate expressions, tracing its development in fiction, cinema, television, comics, videogames and beyond. From the futuristic visions of Fritz Lang and the otherworldly imaginings of Alan Moore and Hayao Miyazaki, to Doctor Who’s adventures in time and space and the dark fantasies of China Miéville, Brian J. Robb sets the key works of Steampunk squarely under the lens of his brass monocle, examining their ideas and themes in forensic detail.”