The Dr Who Guide alerts me to the fact that my radio play Immortal Beloved was broadcast on BBC7 on this day ten years ago. So in its honour, I post up the text of the interview that Kenny Smith did with me for Finished Product magazine.

KS: Firstly, was the finished story the one you always intended to go with? Or did you have other story ideas? Were you asked to submit an outline, and how detailed was it?

The story actually started out very differently, around 2002, as a Strontium Dog script. Toby Longworth asked me if I’d write something with Sanjeev Bhaskar in mind, so I had a character called Vishnu Patel, a six-armed mutant from Bradford, and his sexy associate Carly. The idea was that they’d set off a time grenade on their ship as the Strontium Dogs were getting ready to capture it. Suddenly, the ship was gone, but the formerly barren planet below was covered with city lights. At which point the bounty hunters would realise that their prey had gone so far back in time that they had founded an entire civilisation on the planet, and set themselves up as its divine rulers, an idea lifted from Roger Zelazny’s Lord of Light. The bounty hunters go down to apprehend them, and have to face the issue of the person they’re arresting being the nth generation clone of the person they were chasing. Then there would have been all sorts of arguments about statutes of limitations, and time travel and culpability.

But anyway, Strontium Dog was cancelled, and I was asked to pitch something for the short-lived Richard E. Grant animated Doctor Who. I retooled the story but kept its original title, which back then was Kingmaker. That actually made it a long way through the process before that, too, was cancelled.

18 months later, the BBC’s option on Kingmaker ran out, and I was asked if I’d do something for the McGanns. Time was really of the essence, because everything had to be done in ten minutes flat, or something daft. So I said to Big Finish, look, I’ve got Kingmaker here, the BBC have already approved it. That’s going to go through a lot faster. So we went with that, under a working title of Sins of the Father. I gave [script editor] Alan Barnes some alternate titles, including Karma Police, Together Forever, and Immortal Beloved.

Of course, you can imagine, the outline was nicely matured by that point. It was about 3500 words long, for a script that needed to be 10,000 words total. So it was very well worked out by that point.

There was originally a lot more in there about cybernetic implants as well, in order to match with the Master, who featured in the Richard E. Grant scripts as a travelling companion.

There are still elements of the original, such as when Zeus threatens to kill a different Lucie every day for a hundred years, and a Lord of Light moment, when Hera remembers that Poseidon’s original name was Jeffrey.

Life and death are strong themes in the Sympathy for the Devil and Immortal Beloved – are these themes that you’re interested in exploring?

I’m more interested in what makes us who we are. Same in Sympathy for the Devil. Take the characters out of the situations you remember them in, and what do they do? The Doctor is still the Doctor, the Brigadier is still ultimately his ally, the Master is still a sneaky git. The Ke Le Divisions are supposed to be non-human, like clones, but they still end up with feelings, and those feelings backfire.

In Immortal Beloved, I wanted to ask questions about cloning. I don’t know the answers, but I like asking the questions. I love the idea of these clones turning into their parents, of being able to see them at two stages in their lives simultaneously, and wondering which one is the real person.

Jason Haigh-Ellery jumped on this one right away. I heard that back when it was still Kingmaker, he was already telling people that he was going to direct it, and even threatening to make it as a Big Finish with another Doctor if the BBC didn’t commission it as a Richard E. Grant. I don’t know why he was so enthusiastic about this one in particular, but he was supporting it for two years before it actually went into production! He wouldn’t let the idea drop, he really fought for it.

How did you find writing for a new Doctor/companion team? Were you given much in the way of pointers for Lucie (played by Sheridan Smith)? Did she turn out the way you’d hoped?

This one was great because Lucie is so bolshie. Her dialogue just writes itself, taking the piss out the Doctor all the time, referring to him as her assistant, ridiculing his navigation skills. The perfect Lucie line is actually in Jonathan Morris’s Max Warp, when she calls the TARDIS a shed. I just wrote her as everyone’s annoying big sister walking in while you’re trying to watch Doctor Who and ridiculing everything. So yes, she was perfect. Note-perfect, exactly as I imagined her.

What did you think of the finished story?

I thought it was great. I was rather irked that the BBC announcer said it was set in Ancient Greece, which it wasn’t. I actually had a very nice email from someone at BBC7 telling me who was responsible “just so you know we’re not a bunch of monkeys.” It turned out that the culprit was much closer to home at BF towers. I was present for the ceremonial flaying and keelhauling. 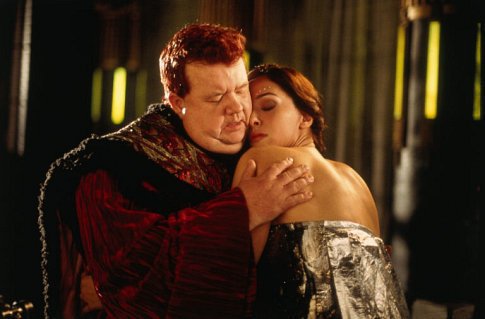 One day my grandfather fell off a ladder and knocked himself out. My grandmother found him and thought he was dead. She grabbed him and said: “No! You can’t go! Not yet! I’m not ready!” I put a lot of that into the lines Elspet Gray had to say as Hera, particularly her scene in the garden. My grandmother said to me shortly before she died: “Jonathan, don’t get old. Don’t get old.” It was so mournful and heartfelt, but I remember thinking at the time, do I have a choice…? All that’s in Hera’s lines, and I think Elspet managed it very well.

Was it how you imagined it to be?

Yes, although Ganymede was a bit of a surprise, since he wasn’t in my script when I delivered it.

I believe that the ending was slightly different – Sarati was ‘poisoned’, to simulate death, thanks to the Doctor. As a result, Kalkin stabbed Zeus. How did the change come about? Are you happy with the revised change?

Yeah, the ending was different when I thought I was writing a 100-minute story. The only real difficulty with Immortal Beloved was slicing it down from 100 minutes for Richard E. Grant to 50 minutes for Paul McGann. Your question implies that was done for me, but I’m pretty sure that I wrote the Sararti stabbing scene myself. So it was all about timing — obviously the poison business was another Romeo and Juliet reference that got edged out. I thought it worked fine without it in the end, but something had to go when 50% of the content was being cut.

How much fun did you have coming up with alternative names for everyday things, like helicopters, etc? Was it a real challenge to get something mythological sounding for things like a decontamination chamber? Did you come up with any more that were cut or changed?

The “magic wand” business was something that had been floating around my head for 20 years, ever since I read the D&D Dungeon Master’s Guide. Look at what it says about the “charges” and powers of magic wands, and rods, and staves. It’s describing firearms: pistols, carbines and rifles. I thought that was so cool. So, I guess that’s my way of saying that it wasn’t my idea at all, but Gary Gygax’s.

I think other people had more fun with it than I did. The “ether trumpet” was someone else’s line. Nick Briggs, perhaps, or it could have been Alan, I suppose. It is the funniest line in the play, and I am now obliged to tell everyone I didn’t write it.

The notion of cloned Lucies being tortured is quite scary – copies of yourself dying in different ways, without you even knowing it. Do you like implied horror like that?

Actually I can’t stand horror. I find it too horrific. I am paid to have an over-active imagination, and horror tends to scare me! I think it’s an excellent way of reversing the standard questions about stem cells and cloning, though. You lose your arm, but there is a magical way of giving you a new arm… except somewhere, there is a copy of you who’s just had his arm hacked off… I think *that* is horrific.

How did you find writing for the McGann Doctor? I felt you had him down to a T – plenty of enthusiasm, but with a serious streak. Did you listen to many of the other Big Finish releases, or did you just write a generic Doctor that you remembered from childhood, as Rob Shearman did?

Is that what Rob did? Oh, bless! I suppose I did, too. There wasn’t a lot to go on with McGann because you only have the one TV outing. I listened to Chimes of Midnight, but more because it was Rob’s not because it was McGann.

To be honest, it’s Lucie that I write for with the McGanns. I find it easier to write the Doctor’s loving exasperation with her, than I do to write the Doctor himself. Lucie thinks of herself as the heroine in her own little show, and I write it that way, and then I put the Doctor’s reaction in later — his reaction being the actual plot and everything. There’s an element of that in Immortal Beloved where she introduces the Doctor as her “bumbling assistant.”

I  have to say, I only heard Brave New Town yesterday, and Sheridan Smith nails it. She nails every line. At her very worst, she does exactly what I wanted. At her best, she takes it and does something I never even thought of. You can’t ask for more than that, can you?

Big Finish don’t let you write “generic” Doctors, though. Briggs will throw something back at you and say: “That won’t work, it’s too Sixth Doctor.” You can actually give him words, single words, and he will tell you if a particular Doctor would use them or not. So whatever Rob thought he was doing, it will have been distinctively McGann by the third draft!

Anything you’d go back and change if you could?

If you could be reincarnated in another body, whose would you go for?

Ooh, Jason Haigh-Ellery’s. All that money, all those women, all that power…

Immortal Beloved is available on CD and download from Big Finish.