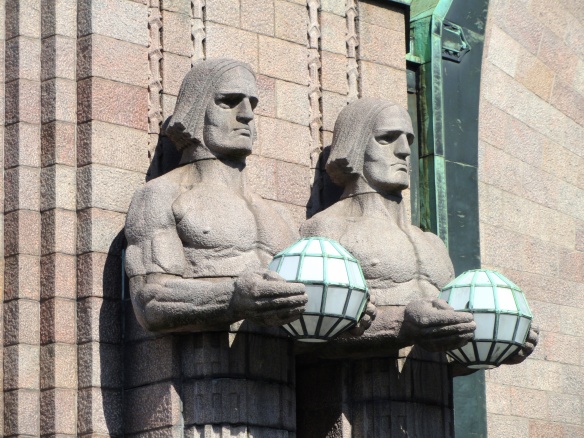 Visitors this summer need not panic; although certain Finns may grumble, and locals themselves sometimes whine about their capital as if it were some sort of urban jungle, Helsinki is a charming city. Architects feted elsewhere in their Finnish hometowns have left many of their finest marks in the very buildings of the central district. Many of its sites are within walking distance, and a tourist bus line links the outliers and the cruise ship terminal. Buses and quaint trams ply similar routes, including one tram that is a travelling pub. Visitors should be warned: it lacks a travelling toilet. This, and further insights below, are extracted from An Armchair Traveller’s History of Finland (UK/US) by Jonathan Clements.

The visitor’s first sight of Helsinki, either descending from the airport bus or arriving by train, is liable to be Rautatientori (Railway Square), dominated by the temple-like railway station designed by Eliel Saarinen, its walls held aloft by great stone titans like heavy-metal rock gods. Animated and rendered a little cuter, these colossi often appear on posters and adverts for VR, the Finnish rail network. The author admits to a dorky thrill whenever he arrives at the station, as often one will catch a glimpse of the St Petersburg train at one of the platforms, adorned with alien Cyrillic, staffed by scowling baboushkas, and ready to depart for another world.

In the square outside the station’s east exit, outside the vampire’s castle that is the National Theatre, an odd statue of the author and playwright Aleksis Kivi shifts uncomfortably in his seat, as if he has just sat on something sticky. He faces the Ateneum, Helsinki’s National Gallery, and home to many of the most famous artworks of the National Romantic period.

A few steps to the south-west of the square is the southern end of Mannerheimintie, (Mannerheim Road), named for the country’s famous Regent and one-time President. This is the centre of Helsinki’s shopping district, boasting an iconic statue of blacksmiths at work, and the entrance to the Stockmann department store that sits beneath the Stockmann Clock. There is nothing particularly remarkable about the clock, but Finns seem to cling to it as a meeting place, and an encounter ‘beneath the Stockmann clock’ is an early phrase that torments many beginning students of Finnish.

The Statue of Mannerheim on his horse is here, walking earnestly past the nearby parliament, rather than facing it or putting his back to it. Statues of other Finnish presidents lurk around the parliament steps like discombobulated party guests, staring dourly at the news crews shooting pick-ups, and across the road at Kiasma, the modern-art counterpart to the Ateneum.

With typical Finnish self-awareness, the Suomen Kansallismuseo (National Museum of Finland) is itself a museum exhibit, one wing of which is designed to look like a church, which stood it in good stead during the war, when its appearance may have warded off Russian bombers. It was also the site of some scuffles during the Finnish Revolution, and its front doors still proudly display the bullet holes shot in the windows, now preserved behind a second layer of glass. The lobby is decorated with frescoes depicting scenes from the Kalevala, painted by Akseli Gallen-Kallela, and that’s before you’ve even bought your ticket!

Russian-era Helsinki was famously designed in imitation of St Petersburg, leading to its substitution for that city as a film location during the Cold War. Although tour guides make much of this, anyone who has seen St Petersburg themselves will know that the resemblance is merely superficial. Watch one of the aforesaid films, such as Warren Beatty’s Reds (1981), and images of Helsinki are shot in close-up, offering little more than street-level backgrounds and cobbled streets. Commonly, ‘St Petersburg’ imagery in films derives from Senaatintori (Senate Square) at the city’s historical centre, with towering steps leading up to the Neo-Classical cupolas of Helsinki Cathedral. The cathedral is frankly more impressive on the outside than within, since its interior displays an austere Lutheranism, as if Ikea were put in charge of church design. In the centre of the square stands the Statue of Alexander II, ‘the Good Tsar’ who granted the Grand Duchy of Finland greater autonomy under Russia than it had ever enjoyed under Sweden. It is supposedly the only statue of a Tsar standing outside Russia, and is an enduring testament to the love that the Finns once had for the country to the east. As the Russification policies of his successors began to bite, Alexander’s statue became the site of a subtle, peaceful protest as Finns laid wreaths at his feet, mourning not only his death, but also the slow erosion of his kind policies. 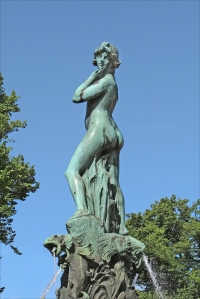 From Senaatintori it is but a short walk to the cobbled harbour, the site of many a farmer’s market and coffee kiosk, and ferries. The site of Helsinki was originally called Vironniemi (Estonia Point), and its proximity to Tallinn is still reflected in the hydrofoil terminal that will whisk you away in just 90 minutes. For anyone who is inexplicably tired of the Finnish capital, Estonia beckons within commuting distance. The harbour sits at the end of the Esplanadi, twinned parallel north and south avenues that lead back to Mannerheimintie, and constitute some of Helsinki’s prime real estate – their meeting place, at Erottaja, is the most expensive spot on a Finnish Monopoly board. It is the site of several posh restaurants, the Swedish Theatre, and Havis Amanda. This naked nymph, sculpted by Ville Vallgren (see Gazetteer: Porvoo), reflects the artist’s Art Nouveau inspirations, and was the subject of scandalised tutting in the Finnish media when unveiled in 1908. A loving recreation of the gamine curves of a French teenager, it caused uproar among Finland’s newly enfranchised women voters but is now a much-loved part of the scenery, affectionately nicknamed Manta. Her fountain waters apocryphally grant sexual potency to anyone who thrice washes their face and shouts ‘Rakastaa!’ (Love), and her crowning with a white student’s cap marks the beginning of Walpurgisnacht celebrations (see National Holidays and Local Festivals: Vappu). What was once clearly a student prank is now televised annually.

The harbour is also the place to get the ferry to nearby Suomenlinna, the Fortress of Finland, which remains a quaint getaway for the marine-minded. It evokes the Swedish, Russian and Finnish eras with numerous installations, as well as a couple of military museums and the Vesikko, a WW2 submarine open to the public. Visitors can also poke around the largely ruined fortifications – don’t miss the King’s Gate, built in 1752 as a sufficiently royal arrival point for Swedish rulers. Nearby inscriptions note that King Adolf Frederick laid the first stone here, while a sad, uncompleted plaque leaves the date blank for King Gustav’s laying of the final stone (he never got around to it). Beneath a plaque announcing that these ‘wolf islands’ have been transformed into a fort for the Swedes, a second inscription intones these immortal words: ‘Eftervärld, stå här på egen botn, och lita icke på främmande hielp.’ It is a fine prophecy for the world that lay in wait for the Finns: ‘Those that come after us, stand here on your own foundation, and trust not in foreign help.’ Arrive at around 09:30 or 17:15 and you can watch the gigantic cruise ships squeeze through the narrow strait (‘Gustav’s Sword’) to Helsinki harbour.

Helsinki City Museum is not one but eight separate facilities dotted around the city, including several villas and burghers’ houses, and the Street Museum on Sofiankatu, which recreates town life in earlier times.

The Uspenski Cathedral, Orthodox counterpart to the Lutheran one, is a more sedate, red-brick affair, deriving its name from the Russian for ‘the Dormition of Mary’. Perhaps Helsinki’s most internationally well-known religious building is further out of the centre at the Tempeliaukion Kirkko (the Church in the Rock), which as the name implies, was hewn into the bedrock. For some reason, this site appears to attract more than its fair share of Japanese tourists.

Out in the Kaivopuisto district, where many foreign embassies and consulates can still be found, the Mannerheim Museum is sited inside the former president’s house. Beware: it is only open on Fridays, Saturdays and Sundays, and free-range visitors are not permitted. The admission fee includes a well-informed guide, although only speakers of Finnish, Swedish and English are liable to be available off the cuff. If you speak French, German, Spanish or Russian, it is best to book ahead. Another Finnish president, who defined the nation throughout the Cold War, is celebrated at the Urho Kekkonen Museum in Tamminiemi – you can book a guide any time but it is far cheaper to take the once-a-day scheduled English tour at 14:30. Finnish and Swedish tours are far more regular; German ones must be booked in advance.

These are but a fraction of the many sights that one can find in Helsinki, which is riddled with smaller museums celebrating everything from the post office to the power company to the Salvation Army. As one might expect from any capital, it is also richly endowed with living history. You can still have cocktails at the Hotel Torni, a favourite hang-out for Cold War spies, or stroll in Kaisaniemi Park, where the eleven-year-old Mannerheim won his first recorded victory – a snowball fight.

Jonathan Clements is the author of An Armchair Traveller’s History of Finland (UK/US).

1 thought on “Helsinki for the Armchair Traveller”