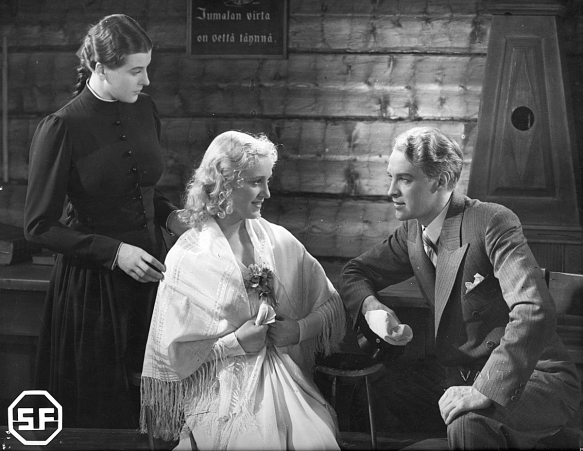 The arrival of city-boy surveyor Yrjö (Jorma Nortimo) drastically disrupts the way of life in a remote Ostrobothnian village. He falls for Eliina (Ansa Ikonen), the disabled daughter of a local bigwig, whose devout sister Johanna (Ester Toivonen) is torn between two suitors, her life-long neighbour and betrothed, and a newer arrival of whom her father disapproves.

Kuin uni ja varjo was based on a semi-autobiographical novel by Eino Railo, which was at the very height of its popularity – in 1937, it had been reprinted three times in the two years since it was published. Certain elements of it seem to break with Finnish filmic tradition, particularly the pat romantic denouements so beloved of Suomen Filmiteollisuus. Spoiler warning: only one of the two leading couples ties the knot by the end, in a miserable ceremony in which the bride and groom wear Gothic black, a man bitterly proclaims his religious faith after being blinded, and a jilted lover almost dies of consumption on the sidelines.

Much of the tension revolves around the clash of privileged newcomers rolling into a town where everybody knows everybody, and has assumed for years that fates are well and truly predestined. Life has not changed a whole lot in the countryside for decades – Yrjö’s arrival is a taste of things to come, as the horse and cart, the church as the centre of village life, and the expectations of Finnish youth are all about to be radically transformed. The wedding scene that closes the film is supposedly a happy ending, but is also a glimpse of a dying rural culture.

The likes of Yrjö serve as a sudden, unexpected wake-up call that there is a whole world beyond the edge of the village, and that things really don’t have to be the way that the villagers have assumed. The nuances of Ostrobothnian language fly right over my head, but are apparently a Thing here, as are a series of unintentionally ridiculous fight scenes, in which men heartily wrestle with one another as if nobody has ever suggested they try throwing a punch. It is also oddly jarring to see a 19th-century church congregation belting out a hymn, since my 21st century experience has been one of Finns staring glumly at their shoes while the church organist plods through the tune and a lone cantor sings along at the back.

Ansa Ikonen, a major stage actress who had thus far only appeared in bit parts for Suomen Filmiteollisuus (better known, in fact for films by the rival studio Suomi Filmi), gets top billing on the poster in the role of Eliina, for which she lurches around on crutches and simpers adoringly at Yrjö. In a scene that might seem clichéd today but was probably a winner in its time, she has a dream sequence at a village dance in which she leaps to her feet and dances with Yrjö, only to be woken from her reverie when her crutches drop loudly to the floor.

Ester Toivonen is winningly severe as the religious Johanna, although she disappears for entire stretches of the film, leaving her rival suitors to duke it out between them. The third big female name on the poster is Laila Rihte as the serving girl Kerttu, whom I barely noticed for the first half of the film, before she is suddenly parachuted into the drama as an alternate love interest. Blink and you also miss Kaarlo Kartio, as ever unrecognisable in another brief character role.