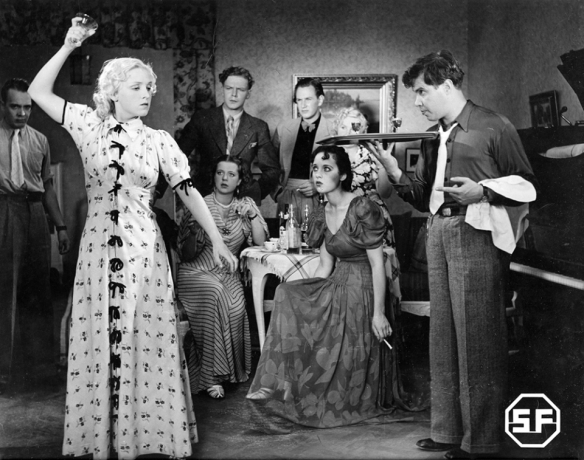 After years buried among his books and papers, the leading mathematician Reinhold Varavaara (Uuno Laakso) pronounces his academic work complete, only to discover that the world has moved on. His wife is a stranger to him, his three children are carefree teenage tearaways, and his family has got so used to his absence, that all they care about is the prospect of the money he might earn by getting an award. The only person who seems to “get” him is Marja (Ansa Ikonen), his son’s girlfriend, in whom Varavaara increasingly seeks counsel and solace.

Ironically for a story that supposedly huffs and puffs about “kids today”, The Unruly Generation (Kuriton sukupolvi) is a rather timeless situation, Mika Waltari’s 1936 play made it swiftly to the screen, but it would be reprised twenty years later with a different leading man, fulminating about different youth habits and popular music, beatniks and atom bombs. Finnish critics are divided about the extent to which the story is autobiographical, with some pointing out that the professor’s name seems to be a hybrid of several tutors that the young Waltari had at the University of Helsinki. Others go further, suggesting that Waltari, then only 28 but already a husband and father, saw himself in the character of the daffy Professor Varavaara, emerging from his study after a marathon writing session, to discover that the world has changed around him. Life was certainly imitating art – the story goes that the workaholic Waltari wrote the play after his wife taunted him that he was incapable of writing a comedy. On the basis of this talky, drawn-out dirge, Mrs Waltari might have had a point, at least this time.

Waltari is one of the most fascinating creatives in Finnish culture, a ridiculously prolific author who seems to be a little overlooked today because many of his most famous works were international in outlook, rather than focussed on the Matter of Finland. He wrote The Unruly Generation fresh after finishing his play Akhnaton, Born of the Sun, which would transform some years later into the work that made his name internationally, Sinuhe, The Egyptian – later adapted into a Hollywood movie starring Yul Brynner. But Waltari did write many works focussed on Finland, several of which would be adapted by Suomen Filmiteollisuus, not merely A Stranger Came to the Farm (Vieras mies tuli taloon, 1938), but also the better known Inspector Palmu series

The Unruly Generation presents a chaste and romanticised notion of a happily married man, tempted by but ultimately resisting a giddy infatuation. Adapting his own script, Waltari delights in the opportunity to shoot on location – the film begins with a prank in which the professor’s son is caught herding cattle at the Helsinki parliament building. He throws away numerous scenes to make space for such larks (jettisoning the play’s reconciliation between husband and wife that leaves the film version a little more ambiguous), but crams so much in that his screenplay originally topped out at 259 pages. Even with cuts, it drags on seemingly forever, with little to offer the contemporary viewer except a glimpse of 1930s Finnish youth culture: singalongs in a cloud of cigarette smoke, energetic ballroom dancing, and a hard-drinking generation fervently embracing the lifting of Prohibition since 1932.

By this point, Suomen Filmiteollisuus was ramping up its production schedules, because there are a bunch of new faces both in front of the camera and behind it. Wilho Ilmari directs for the first time for the company, and although there are some familiar faces in the cast (blink and you’ll miss sometime leading man Jorma Nortimo as a waiter, and cinematographer Eino Kari as a gambler), the cast is largely drawn from the players of the original stage version. One notable exception is the actress Rauni Luoma (last seen here in The House at Roinila), the smouldering beauty upon whom Waltari supposedly developed a crush not unlike that of his fictional Professor Varavaara on the vivacious Marja.