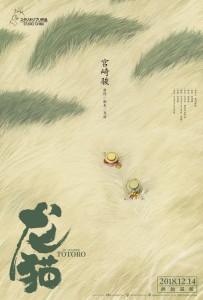 Hayao Miyazaki’s fluffy forest spirit Totoro has been around in China for thirty years, sneaking in through Taiwanese or Hong Kong DVDs, or stowing away in kids’ luggage on return trips from Japan. But his first official cinema outing in the People’s Republic did not come about until December 2018, when he suddenly burst out on 3,000 screens.

Interpreting the numbers, Totoro had a fantastic opening weekend, making $12.9 million and beaten only by Aquaman. But by the end of its second week in Chinese cinemas, its takings had slumped 75%. I’m writing this article on New Year’s Eve 2018, as Totoro’s total Chinese box office takings edge over the $20 million mark.

You might not think that $20 million is a lot of money, especially considering that half of that money stays with the Chinese distributors and exhibitors, and fair old chunk probably went on marketing. But Studio Ghibli certainly hasn’t lost any money by belatedly releasing its much-loved classic in China. In fact, it’s easy to forget that Totoro only made $5 million on its original Japanese release, and that was on a double bill with Grave of the Fireflies. Thirty years on, this is money for nothing. The Chinese box office last month counts for 80% of Totoro’s global lifetime theatrical takings!

But as long-time readers will know, movie accounting is often not about those numbers at all. It’s about a bunch of other issues, including the fact that the Japanese 2012 Blu-ray of Totoro created an all-new, cleaned-up pin-sharp copy of the film, ready for duplicating on 3,000 hard-drives to open on 3,000 Chinese screens. It’s about the fact that, unlike creaky old TV shows or low-budget video fare, movies have a much longer shelf-life, and a period piece like Totoro, with a rural setting and a feel-good tone, seems tailor-made for the Chinese provinces.

Meanwhile, with the suspension of the One-Child Policy, there are suddenly twice as many Chinese children to form a market. Children’s entertainment, along with clothing and toys, is a surging new growth area in modern China. Even considering the vast piracy of Ghibli products over the last few years – and I have never seen a Chinese video pirate who isn’t selling Totoro, usually a knock-off of the Taiwanese dub – there’s a whole new generation of Chinese kids who have never seen it, who now get to see it in cinemas, ahead of a roll-out of other Ghibli products. And is someone eyeing up the blueprints for Japan’s new Ghibli theme park, and wondering if they could transplant something similar to Shanghai Disneyland…?

[Since this article was published, the Chinese box office takings for Totoro climbed to $25.75 million]

Jonathan Clements is the author of Anime: A History. This article first appeared in NEO #185, 2019.