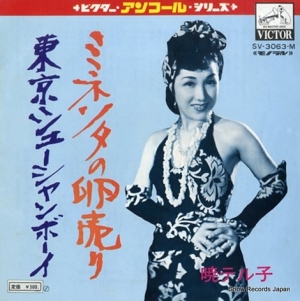 The singer Akatsuki Teruko summed up the Occupation era with her 1951 song Tokyo Shoe Shine Boy, an upbeat ditty with a downtrodden message about a Japan that was still in thrall to American dominance. The titular shoeshine boy is getting on with his work, doing his earnest best to make every scrap of leather sparkle, while musing:

That lady that I like
Hasn’t turned up yet today
But perhaps she’ll come back
Even if it’s rainy or windy.

The girl in question appears to have business elsewhere, as a later verse reveals:

That lady in red shoes
Is she back walking around Ginza today
With gifts of chocolate
Chewing gum and Coca Cola?

With its recognisable foreign words and its frisky rhythm, Tokyo Shoeshine Boy was a hit in the dance halls – but it is also a flatly hopeless elegy, loaded with subtle clues, starting with the slang term for a Ginza promenade, Gin-bura. As the novelist Tanizaki Junichirō once archly observed, only a country hick would use such a phrase. That poor migrant labourer has nothing to offer her – he literally couldn’t even shine her red shoes with his boot-black polish, nor can he pile her with presents like GI-issue chocolate and chewing gum, or take her for an exotic Coke in swanky Ginza. ‘I’m sure she’ll come back tomorrow,’ he says brightly. ‘Someday we’ll go out dancing together.’ It is a triumph of Japanese melancholy, never once letting its enthusiasm slip, even though any listener can plainly hear what has happened. The song makes background appearances in two films – listen closely and you’ll hear it evoking the pop culture of the Korean War in M*A*S*H, and playing incongruously during a terrorist attack in Akira.

From An Armchair Traveller’s History of Tokyo, by Jonathan Clements, available now in the UK and the US.