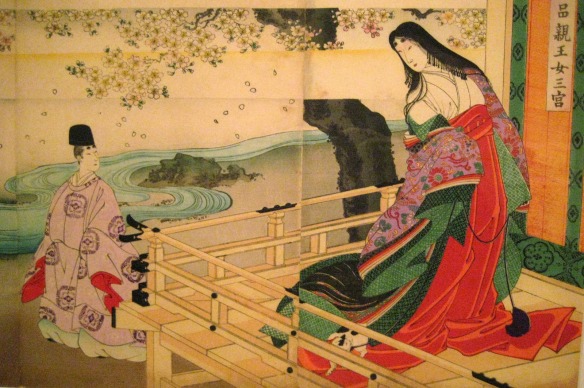 Lady Murasaki’s Tale of Genji appears to have been patched together over the course of a couple of decades, serialized in episodic chapters for a small circle of intimates. Its titular hero is a minor princeling, the son of one of the emperor’s lesser concubines, doomed to a life of genteel idleness and forced into several soap-opera situations involving unwelcome betrothals, doomed love affairs, and court scandals. It is likely, but impossible to prove, that some of the situations in which he finds himself were thinly disguised allusions to real goings-on in the capital.

“I have a theory,” Murasaki wrote, “about what this art of the novel is…It does not simply consist in the author’s telling a story.” Instead, she argued for writing as a true vocation—an insurmountable urge to communicate with others.

“On the contrary, it happens because the storyteller’s own experience…even [of] events he has only witnessed or been told of—has moved him to an emotion so passionate that he can no longer keep it shut up in his heart. Again and again, something in his own life…will seem to the writer so important that he cannot bear to let it pass into oblivion.”

Murasaki’s depiction of court life is an idealized world of courtiers dueling with witty poems, and of lovelorn princesses waiting for their Prince Charming to sneak into their bedchamber for a midnight tryst. She presents a view of an idle, timid coven of women diverting themselves with guessing games and literary competitions, largely at the mercy of a society of rapacious or dismissive men. Sometimes it’s difficult to tell what’s worse for one of Murasaki’s women: attracting the attention of a nobleman who will force himself on her in a midnight visit, or realizing that such attentions are waning, that he has found another diversion in another palace courtyard, and that she is left literally holding the baby.

The attitudes of Murasaki’s characters make it abundantly clear that women in in her world are second-class citizens, “creatures of sin” in Genji’s words, regarded by the menfolk as idle, ditzy decorations. Such attitudes are a world away from the ancient legends of Japan, which are thickly populated with queens and warrior-women, and seem to imply that the indigenous people accepted a power structure that regarded women and men as complementary equals. In The Tale of Genji, we catch a glimpse of the damage that may

have been done by several centuries of immigrants from the mainland, infusing the Japanese with another Chinese import—chauvinism.

Entire shelves of books have been written about The Tale of Genji, and the adroit, oblique way that it purports to be about its title character, the “shining prince,” while actually being about the women in his life. An early chapter features Genji and his friends idly and somewhat cluelessly discussing the types of women that exist, setting up dozens of later chapters in which he blunders into relationships with their real-world manifestations.

From A Brief History of Japan by Jonathan Clements, available now in the UK and the US.