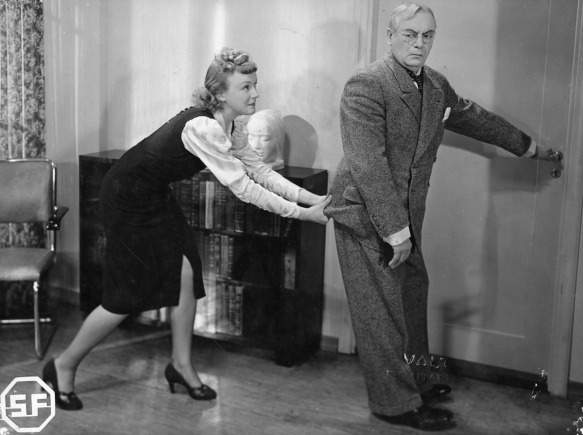 Kaarlo Angerkoski turns up in the role of “Kiinan Kalle” (China Charlie), a professor newly returned from Shanghai with a Song dynasty vase in a crate. Inevitably, his arrival becomes the catalyst for a bunch of misunderstandings, starting with Aarne’s co-star Irma (Kaisu Leppänen), who mistakes him for Dr Vartio and starts stripping for her examination. “I’m a professor of sociology!” he pleads, nobly covering his eyes. But Dr Valtio isn’t that smart, either, as proved when he tries to open his porcelain crate with a hammer. The Song dynasty vase (which looks like it cost about €10) becomes a second misunderstanding that the cast have to deal with, leaning on a theatre prop department to try and glue it back together before China Charlie notices.

With a title like that, if Takki ja liivit pois! were a British film, I would be expecting to at least see some boobs. But even the jovial exclamation mark is little solace when the fateful words “based on a play by Agapetus” appear on screen. Still, even a comedy without any laughs is liable to be a welcome break from all the worthy films celebrating the Finnish revolution and cocking a snook at the Russians in 1939. And director Jorma Nortimo gets off to a rip-roaring start with an opening shot that shows Ilona’s car driving through the streets of Helsinki, its badge reading “SF” as in the studio Suomen Filmiteollisuus, and its number-plate reading “A-22”, the designation for this movie in the studio catalogue. Such playful juxtapositions continue with the introduction of Aarne, who is shown locking lips with some floozy, only for the camera to pull back to reveal he is onstage, rehearsing a role.

Korhonen reprises his role from the stage version, and is remarkably naturalistic – director Nortimo even leaves in some sequences in which the surgeon and his daughter talk across each other, preserving a certain naturalness of tone. Other elements are conspicuously theatrical, such as Jacob Furman, a 12-year-old tap dancing prodigy, appearing in a brief cameo as a soft-shoe-shuffling telegram boy. He at least is supposed to be performatively noticeable; many other members of the supporting cast are just pretty terrible – a particular thumbs-down for Inna Ahti as Siiri the nurse, who seems permanently annoyed about something, quite possibly that she is only playing Siiri the nurse. Ahti was one of the girls inducted into the recently established Suomen Filmiteollisuus acting school, where she apparently seems to have learned very little. And one presumes that she is particularly sulky that her fellow student, Sirkka Sipilä has somehow snagged the lead role in this frippery.

The production retains the unnervingly extreme close-ups of actors addressing the camera which seems to be a staple of Suomen Filmiteollisuus adaptations from the stage. However, rather than the locked-off camera filming a stage production as if sitting in the audience in a theatre, Nortimo’s camera here leaps vivaciously between two-shots, close-ups and mains.

Whatever. It’s another unfunny Agapetus comedy, filmed somewhat creatively on limited sets, with only seven exterior scenes in the entire film, a reasonable way of cranking out something for the cinema-goers who don’t want to sit through the season’s anti-Russian agit-prop. And perhaps Suomen Filimiteollisuus was on to something, since this film performed above average at the box office, despite having been shunted off the production line like a proverbial sausage, while its fellow films that year ran way over budget.

The doctor falls for Irma the actress in a passionate scene backstage at the theatre, where the rest of the cast are performing some bizarre orientalist confection which involves Ilona giving herself Nosferatu eyebrows and cat-flick eye make-up which apparently “make her look Chinese.”

“Not in any way a sparkle of joy,” commented the reviewer in Uusi Suomi. “Perhaps my enthusiasm would have been greater if the film had been a bit livelier.”