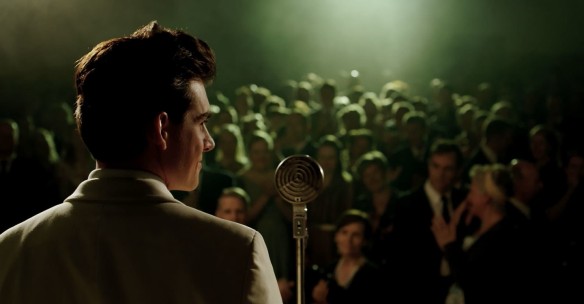 Factory worker Olavi (Lauri Tilkanen) wows the audience in a talent slot at a local dance in 1937, and is soon fronting a Helsinki big band as their star singer. In a career briefly interrupted by the Winter War, he drifts into movie roles and concert tours, wowing the impressionable women of Finland with his golden voice.

Despite a creative stretching of its budget, and a wonderful use of found-architecture to recreate 1950s Finland with pin-sharp digital footage, Timo Koivusalo’s bio-pic of Finland’s favourite crooner is tediously long and scatter-gun in its approach, like one constant montage of lip-sync classics, interspersed with scenes of drinking, bickering and half-hearted flirting. The material on offer makes it clear that this could have been a Boogie Nights or Mad Men of Finnish dance-hall culture, investigating the changes to the music scene in a country struggling to cope with new technologies and musical styles. An aside in an early scene alludes to a fascinating detail about Finland at war – that dancing was proclaimed illegal, as a mark of respect to the soldiers fighting at the front. From this low, low starting point, Olavi gets into big-band waltzes, but experiments, too, with being one more singer in a quartet, a celebrity voice with an anonymous backing group that tours the hinterland, a movie star who happens to sing, and the manager and impresario of his own record company.

Equally, this could have been a film about that perennial Finnish bugbear, the demon drink, starting with Olavi’s mother Ida (Jonna Järnfelt) and her Prohibition-inspired temperance, taking us through the leading man’s slow descent into alcoholism on the road. Had someone with any grasp of dramaturgy been let anywhere near this, it might have even been a post-modern exercise in the mess he left when he went away, ditching Olavi’s character entirely in favour of the way he is perceived through the women in his life – the mother who is terrified he will end up like his deadbeat Dad; the nameless brunette he humps and dumps in his first montage, and Irene (Malla Malmivaara), the teenage single mother who becomes his long-suffering wife, reduced to helping the kids glue postcards into an album of all the places their absent dad is touring. She eventually runs for Sweden (the shame…!), and returns at the end to tell him that they were never meant to be. Such an approach would have added real weight to a scene when an anonymous soubrette (Pamela Tola) rings Irene’s doorbell, announcing that she is Olavi’s muse and girlfriend, and that she has been stood up for their Friday-night tryst. Is she a nut-job or for real…? We never find out.

We know it’s going to end badly because of the gloomy framing device, beginning with an opening scene in the 1970s, when we see an old, impoverished Olavi (Raimo Grönberg), stuck helplessly on the sofa while the radio plays one of the classics from his heyday. But after that, it’s downhill all the way as Koivusalo’s script ticks linear chronological boxes like a TV movie. It is as if the fact of Olavi Virta’s existence is enough to have got this film greenlit; the music is supposed to speak for itself, which is all very well, but you can hear that without going to the cinema. As a media historian, I was more intrigued by the film’s off-hand allusions to cataclysmic disruptions in the world of Finnish music – walled off from the outside world, and enjoying the built-in obsolescence of fragile shellac gramophone records. Olavi Virta’s fame and subsequent fall from grace went hand-in-hand with the sudden opening up of the music industry to foreign imports, the rise of longer-lasting vinyl and the unstoppable onslaught of rock-and-roll – Bill Haley’s version of “Rock Around the Clock” dates from 1954, just as Virta was reaching the height of his dance-hall days.

For someone steeped in Finnish culture, there are all sorts of walk-ons and cameos, including figures from the history of Finnish film, and in one scene played unsuccessfully for laughs, an encounter with Vesa-Matti Loiri as a jazz-loving schoolboy. The songs, meanwhile, are deeply ingrained in the nation’s tango-dancing and easy-listening playlists, and the appeal of this film for Finns, presumably, is the way in which it embeds familiar tunes, forever part of the wallpaper, into the real-life events and traumas of their singer’s life experience. Except, even then, Koivusalo’s script hits oddly dissonant notes. A 1962 drunk-driving incident, for example, thought to be the beginning of the end of Olavi’s career, sneaks in as part of yet another montage, and you’d need to already know about it to appreciate what just happened. 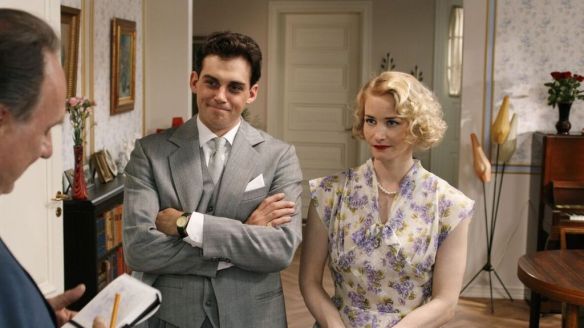 A couple of scenes with a lickspittling journalist, flailing to read portent into everyday activities and mundane encounters, demonstrates an awareness of the many media fictions that surrounded Olavi Virta’s life. Shortly before this film was released, his adopted daughter Ilse Hammar, now a thoroughly assimilated Swede, published Isäni Olavi Virta (Olavi Virta My Father), which offered a series of stark challenges to the narrative promoted by the film. Hammar claimed, for example, that the main catalyst for Irene leaving Finland was not Olavi’s womanising or media attention, but the unbearably miserable and hectoring presence of her mother-in-law, Ida, who dominated their home life in Finland. One cannot simply refute hearsay with more hearsay, but it serves to demonstrate just how difficult it must be to salvage a single narrative from the whirlwind of materials surrounding Olavi Virta’s life.

Lauri Tilkanen, in rare moments when he is obliged to do more than lip-sync, shows an impressive grasp of the real Olavi Virta’s voice, although as in his earlier role in Tellus, he seems unable to rustle up a single teaspoon of chemistry with any of the adoring Finnish women who throw themselves at him. For a film that chronicles the sordid groupie-bedding life of a singer on the road, there is also an infuriating lack of gratuitous nudity – although this was a production intended for the cinema, it seems likely to endure best as a fast-cut trailer highlighting its budget and big set-pieces, and an afternoon TV movie, ignored in the background of a Finnish summer cottage, and occasionally attracting a moment’s attention when granny hears a golden oldie. 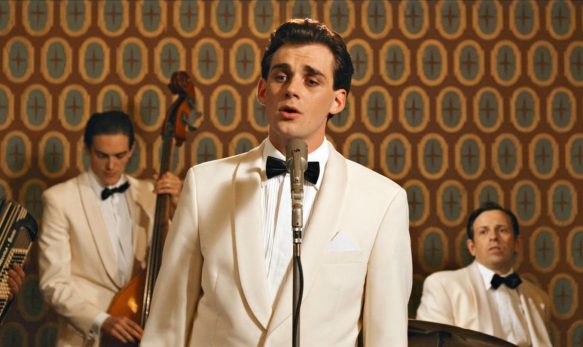 The Finnish press was merciless with this long film. Helsingin Sanomat observed that it simply wasn’t good enough to sustain two hours. Apu magazine commented that the “furniture looks genuine, but the people do not” – a not unreasonable review for a film that meticulously recreates the material culture of the 1950s, but then populates it with stick-thin 21st century actresses, and a cast that seems to be perplexed by tobacco, alcohol and old-fashioned phones. It’s also not clear to me to what extent Koivusalo believes the Olavi Virta hype. Much is made of his hit, for example, with a song from the movie Kalle Aaltonen’s Bride (1944), but to someone divorced from the film’s context and reception, it sounds rather mediocre, as if we are being asked to celebrate the career of a lounge-singer whose fame rested on being a big fish in a very small pond. In admittedly academic terms of “errors of historical practice,” why is Olavi Virta being commemorated?

I don’t ask this question out of spite towards the Finns. I have owned his Greatest Hits collection for a decade, long before this film was made. I danced to “Hopeinen kuu” at my wedding, and I was the one who put it on the playlist, and when my son was still a tiny little baby, I used to waltz around the living room to Olavi Virta songs with him in my arms, because I thought it was something his late grandfather would approve of. I have long been fascinated with the kind of steely determination that is required to make a living in the creative arts in a language territory with only five million inhabitants, particularly when a tour must take into account the expectations and tastes not of massive metropolitan enormo-domes, but of provincial dance halls and town theatres. When, for example, Olavi “treats” his band to a feast that amounts to two bottles of vodka and a bowl of a hundred sausages, I don’t know if we’re supposed to find this funny or… well, Finnish.

I am also not unaware of the aggressive nature of Finnish groupies, owing to the odd fact that I happen to bear a slight resemblance to a modern Finnish celebrity crooner, and have sometimes been molested by drunken Swedish-speaking cougars on trains and in bars, where their beer-googles refuse to let them see that I really am not who they think I am. But I digress – Koivusalo’s film marks out a tantalising possibility, that Olavi Virta’s rise and fall was a matter of his chance existence in a highly protected and forgiving musical environment, which collapsed when it was opened to wider competition.

Ten minutes before the end, Tilkanen disappears from the film, and we are confronted with Grönberg again as his twilight self – portly, haunted, shaking from a stroke, and cared for, it is revealed, not by a loving wife, but by a pragmatic housekeeper (Seela Sella). He stumbles out onto a stage to face a fractious crowd of hipsters, who are cowed and humbled when he launches into one of his tear-jerking classics. I can’t help but think that this should have been Grönberg’s film, with Tilkanen limited to a supporting role in flashbacks, in a story that could luxuriate in the overwhelming sadness lurking within so many Finnish songs. It’s certainly something I would have considered making more of, and indeed, may have been something that Koivusalo made more of in a discarded earlier draft.

“You can take my possessions, but not my voice,” snaps Olavi at the bailiffs as they pack up his house, but his proud boast turns out not to be true. He not only lost his voice, but had to re-learn his own songs after his stroke in 1966, and I wonder what the film would have been like if that had been our point of entry, forced, like him, to learn again from scratch what it had been that made him who he was.

The film ends with Olavi and Irene shipped off to a Spanish beach by a Finnish magazine for a breathless photo-call. The estranged couple are badgered by a journalist into saying something positive about rekindling their marriage, but Irene has long since moved on. This junket really did happen, although Ilse Hammar’s book adds provocative details that could have been another direction for Koivusalo’s script to follow.

“There were complete strangers on the beach,” she recalls, “who came up to Dad and thanked him for the songs, which he had given to them when they were young. When Mum told that story, it was so beautiful.”