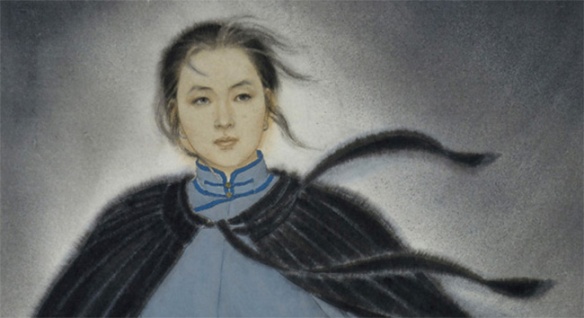 Executed on this day in history: Qiu Jin.

She read forbidden pamphlets, printed by the revolutionary overseas Chinese organizations in distant Japan, and she wrote The Song of the Precious Sword, in which she accused China of being in a coma. China, she wrote needed to wake up and remember its great past. It needed to listen to the tolling of the bell signified by the “white devils” who occupied Beijing. It needed people like her to risk their lives, pick up swords, shining brighter than jewels “in the light of the sun and moon.”

There! There it was, a sun-moon reference to the lost Ming dynasty – a clarion call to rebels. And if that were not clear enough, the song included a call for suicidal resistance, recalling the infamous assassination attempt on the man who would become the First Emperor.

Don’t you recall Jing Ke’s visit to the court of Qin? / When the map was unrolled, the dagger appeared! / Although he failed to stab him there in the palace / He still managed to rob the evil tyrant of his soul!

Qiu Jin sometimes liked to use a pen-name meaning the Woman Warrior of Mirror Lake, likening herself to a wandering heroine from a fantasy novel. Her writings obsess constantly over swords, using terminology lifted from heroic romances. She idolized the Song dynasty hero Yue Fei, writing at least two songs of her own to the tune of his The River All in Red:

My body will not allow me / To mingle with the men / But my heart is far braver / Than that of a man.

It was in Beijing that Qiu Jin stopped wearing make-up and started attending protests in men’s clothes. Arguing with her wastrel, abusive husband, who wanted to take a concubine for himself, she walked out on him and their two children. “I have pawned my hairpins and my rings,” she wrote, “to travel across the ocean.”

The author Lu Xun, then a young medical student in Japan, witnessed her brandishing a knife before a crowd of Chinese ex-pats and telling them they could stab her with it if she bowed to the Manchus. Qiu Jin published several short-lived magazines and polemic articles in Japan, working towards a theory of revolution that argued that China’s men had failed, and that the country could only become strong again through the education and liberation of its women. Alluding to the medieval feminism of Empress Wu, she wrote that women in ancient times were fully the equals of men. Referring to Uncle Tom’s Cabin, then a hit in translation among Chinese literati, she compared the status of women in China to that of Negro slaves in America.

Women, she said, had to stand up, and that involved unbinding their feet from centuries of oppression. “These… shoes,” she wrote, “condemn us to inaction. This must change!” 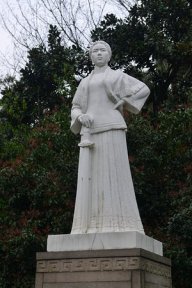 In Japan, Qiu Jin began work on an epic poem, Stones of the Jingwei Bird, a reference to a drowned princess, reincarnated as a bird, who drops pebbles one by one into the sea in a vain attempt to fill it. A powerful, on-the-nose allegory of China, it was set in a fantasy realm, whose ancient Yellow kings had once been great men, but whose descendants were increasingly somnolent and distracted, and whose modern successors were in a state of permanent slumber. Their ministers were befuddled and myopic, prepared to bow to the throne even when a foreigner sat on it, looking only to their own self-interest, and pointing at “primitive books” that justified “keeping women in fetters and ensure that they remained stupid.”

Foot-binding, she wrote, was merely the most obvious, painful, pointless hobbling of women in Chinese society, and Chinese society could not see that by holding back its womenfolk – from education and liberation – it was holding back its own ability to resist foreign oppression. And in her fictional allegory, the Queen Mother of the West, ancient Daoist deity, sent a divine squadron of “golden lads and jade maidens” to study in Japan and return to China to save it from itself.

She returned to China, travelling third-class, dressed as a man and wearing a sword for protection. She was fulsome in her praise for Japan, which had proven the power of modernization by winning the Russo-Japanese War of 1904–5. Back among her friends in Shanghai and Shaoxing, she encouraged them to get drunk and perform sword-dances. In 1907, she accepted the post of principal of the Datong School for Girls, where her students would sing lyrics like her Lament for China:

So why do we find it impossible to surpass these white men?

It is because we are locked in a prison of darkness…

Qiu Jin blamed white men for China’s troubles, but she also blamed men in general for ruining women’s potential. In particular, she blamed the Manchus – the symbol of her rebel organization was the character Han, asserting a desire for return of Chinese rule to the Chinese.

From A Brief History of China, by Jonathan Clements.