In the Grand Duchy of Finland in 1916, a group of independence activists plot to resist Russian oppression. They volunteer for the secret jaeger battalion being trained in Germany (for which see the previous year’s Jaeger’s Bride), they run off angry pamphlets on a hidden press, and they try to prevent a list of agents from falling into enemy hands.

Yrjö (Tauno Majuri) is an undercover agent planted in the Russian gendarmerie, pretending to be a collaborator while secretly passing information to the resistance. Kari (Turo Kartto) gives up the fight and takes a job with the Russian-friendly senator Niskanen, although he spends most of the film fulminating about what an arsehole Niskanen is, even to the senator’s face, so he is hardly hiding in the shadows. Niskanen’s fiery daughter Marja (Helena Kara) is openly sympathetic to the activist cause, which makes her the ideal candidate to sneak in to the quarters of the dastardly officer Vasiliev (Ville Salminen) and steal the papers.

Meanwhile, General Danilov’s daughter Katjushka (Tuulikki Paananen) is sweet on Yrjö, and mistakes his sneaking around for the actions of a two-timing cad, causing her to inadvertently start a vendetta against Marja, who really is out to stick it to the Russians, but not in the way that Katjushka thinks.

Released by Suomi-Filmi in April 1939, a time loaded with apprehension about a new Russian threat, and mothballed for 38 years after 1944 in order to keep the Soviet Union happy (see also The Jaeger’s Bride), Risto Orko’s Aktivistit is loaded with propagandistic exhortations for the people of Finland to fight to the last against the Russian eagle. There’s a lot of talk about the “sacred duty” to resist, and “no sacrifice is too great for the fatherland”, all priming the Finns for a real-world conflict just around the corner. A bunch of Finns go on the run for the Swedish border, tracked down to a remote farmhouse for a Christmas Eve shoot-out. All seems lost, and then 1917 dawns…

The most striking thing about The Activists is the confusion over what kind of revolution the Finns want – when a coup actually breaks out, it’s Russians overthrowing the Tsar, not necessarily Finns overthrowing the Russians, and the titular activists risk being lost in the melee. The story of the Finnish Revolution hence comes nested inside the Russian Revolution, and the film artfully encapsulates that confusion – there are many scenes where it is not all that clear whose side we are supposed to be on.

The opening overture references both the Communist Internationale and the national anthem of independent Finland, as well as La Marsellaise for good measure, foreshadowing a similar music sting in the opening credits of the later Casablanca. The cast themselves are split between good Finns, bad Finns, indifferent Finns, good Russians, bad Russians and bad Russians who might prove useful to good Finns. Yrjö is in such deep cover that he spends half the film being beastly to Marja, before she realises that he is on her side. Katjushka can’t make up her mind if she is a friend or a foe, while her father General Danilov gains the respect of the Finns, even as he fights them.

“Russia faces a great affliction,” says one of the activists grimly – of all of the Tsar’s domain, only Finland did not end up as a Communist state, and cinema-goers in 1939 had every right to fret that the jury was still out on that, too. There is a subtle emphasis on the lack of glamour faced by true patriots – Ville (Uuno Lakso) is the best agent among the activists, but largely because he is happy to slum it as an undercover drunk or rag-seller. Much is made of his mastery of disguise, and his noble willingness to get his hands dirty out of the spotlight.

When the Revolution breaks out, the Russians and the Finns both run for the local prison, hoping to free their own and fight their corner. An almost comical series of about-faces ensues, as Russian fugitives believe they have reached a friendly redoubt, only to find themselves chucked into the clink. 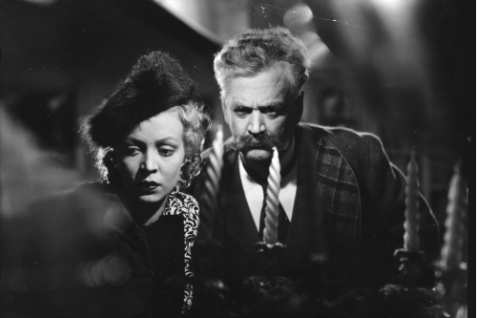 The film is, however, rather confused on other levels, too. Vasiliev is just about to shoot Yrjö in his cell, and then magically both of them are elsewhere, unharmed, even though we hear a gunshot. There are several moments of camera trickery that don’t quite work, including what appears to be early experiments with subliminal frames, and a drunk’s-eye view of his captors, as well as heavy-handed shadow symbolism, with crucifixes falling across pertinent pages from the Bible, and the patterns on shawls and curtains creating tattoo-like impressions on actors’ faces. For modern listeners, the revolutionaries’ exuberant celebration takes on a surreal tone when they spontaneously burst into the Russian folk-song Korobushka, better known today as “the Tetris tune.” Much of the action is marred by a bunch of actors who seem to think that getting shot equates with suddenly falling asleep, which is a shame, because The Activists has a number of rousing songs (the first ten minutes is practically a musical; later, there is an intricate dance scene with dozens of participants), and presents a fascinating glimpse of life in Finland when it was a duchy under Russian rule.

The DVD comes with English subtitles (which even rhyme for the songs), as well as several bonus features, including stills from the making of the film, and a documentary about horse-riding in Lappeenranta.