Irja (Helena Kara) breezes through town in an open-topped sports car, a carefree blonde loving life, until her car breaks down in the road and blocks the path of an entire column of cavalrymen. Luckily for her, the handsome Kyrö (Kullervo Kalske) is there to give her a push in more ways than one. He drives off in her Bantam Roadster, and she retaliates by stealing his horse.

Like The Regiment’s Tribulation (1938), which similarly made light of the reasons why a country might have an escalating military presence in the first place, Red Trousers plays the soldier’s life for laughs and glamour. Much is made of Kyrö’s cavalry band playing their instruments as they ride, an effect almost immediately ruined by the sight of the drummer enthusiastically bashing away despite there being no drums on the soundtrack. First-time director Ilmari Unho wastes miles of film in lavish beauty passes of the cavalry, as if their mere presence should be enough to excite us, and has plainly badgered entire mobs of extras to act as if it excites them.

The extras, in fact, are the most hypnotically awful thing to watch in this film – happy crowds who are plainly not happy, and old ladies who talk excitedly to thin air as if they are providing walla for an audio-only production. Deep down, the script, adapted by Unho and Aarne Orri from Valfrid Ahonen’s 1934 radio play The Dragoons Arrived (Rakuunat tulivat), seems to want to grapple with the tensions brought about by the arrival of a military unit in a mundane town. There are attempts to document the clashes in expectation and flirtation – the local girls who swoon at soldiers, the local boys who feel threatened by the presence of men in uniform, and the older townsfolk who just wish they wouldn’t put their freshly polished boots on the furniture. 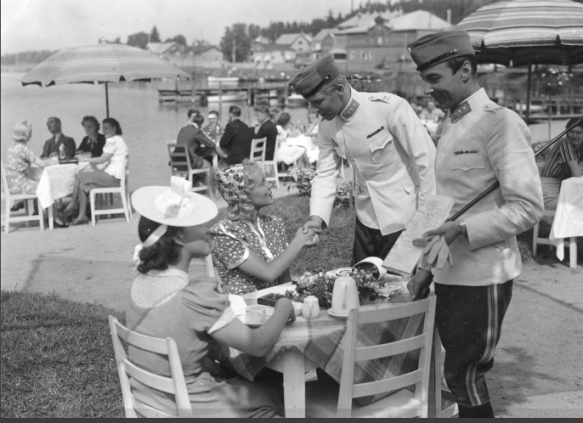 For the modern viewer, it is interesting to see how little has changed. Location footage has been shot near the castle and waterfront at Lappeenranta, which has retained many of its early 20th-century buildings to this day. I recognised the streets immediately. A year after he was ogling the talent on the beach at Hanko in For the Money (1938), Kullervo Kalske is back for another instalment of his Summertime Chat-up School, flirting shamelessly with Helena Kara amid the waterfront cafés. Local women, depending on their mood and situation, either giggle helplessly or sneer contemptuously at the randy soldiers, while both town and fort have to negotiate compromises in acceptable behaviour.

Although, I have to point this out: Lappeenranta is a town with a giant military base in the middle of it. It’s not like they’d never seen a soldier there before, which makes the choice of filming location slightly problematic, particularly because all these soldiers ever do is play musical instruments and chase girls. There seems to be a definite disconnection between the original performance for a non-visual medium and the images on screen, many of which often seem as if they have been stuffed up there merely to fill space. In particular, at the 30-minute mark, we are subjected to three pointless musical interludes. Well, they seem pointless, now – perhaps in 1939 they were the ideal chance to nip out for a piss and a pastry. Within a year, the impetus towards variety would see films that were nothing but musical interludes, such as S-F Parade (1940) and Foxtail in the Armpit (1940) – we’ll get to those soon enough.

There’s also an element of class consciousness. Kyrö and Irja, an officer and a lady, seem destined for an acceptable onscreen romance, whereas a similar mutual attraction between their underlings – his squaddie and her maid – is greeted with scowls and scoldings. Meanwhile, Hannes Häyrinen, an actor fated to go on to great things, is here saddled with the role of Uuno, the hapless, bespectacled, stuttering milksop, presumably intended as an allegory of everything that a Finnish fighting man is not, but played here so savagely that it borders on mockery of the afflicted.

The media reaction to its November 1939 release was one of muted praise, with many a reviewer commenting with a resigned shrug that anything bringing a note of joy in difficult times should be welcomed. But seen with the eyes of posterity, Red Trousers feels like an ill-judged carnivalisation of serious matters, an attempt to laugh off the escalating approach of war. Everybody has a laugh about the soldiers in their midst, as if genteel ladies are taking tea and attempting to ignore the elephant in the room.

Eleven days after it was released, military matters descended on Finland for real, with nearly half a million Soviet troops mustered at the border, and 61 Finns killed in a bombing raid on Helsinki.

“When the red trousers go on,” decrees Kyrö, presumably referring to his dragoon jodhpurs, “nobody can resist.” Except this film is in black and white, so I have no idea what colour his trousers are at any given point, and it might as well still be radio.