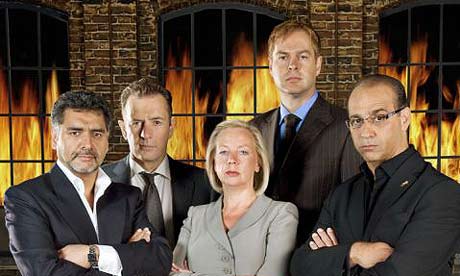 In Japan, where the concept was first invented, they were called the Money Tigers. In Finland they are the Lions. In Israel, the Sharks. We call them the Dragons, and their job is to audit the plans of would-be entrepreneurs in the Dragons’ Den. If Judge Judy isn’t on, I’m there, watching the way they pierce to the heart of bad ideas. And sometimes, for fun, I imagine what it would be like if someone tried to attract the Dragons to invest in the anime industry.

Gruff Scotsman: So these Japanese cartoons, are they big in Japan? How big? Right, I see, so the kiddie programs are watched by kids, but you want to sell them on DVD? How do little children buy a DVD? Oh, so you actually want to sell anime for an older audience than that… teenagers? Do the teenage shows have the same ratings? They don’t? They’re often shown at two in the morning when only security guards and insomniacs are watching? And you call that “big in Japan”? I’m out.

Scowling Blonde: So how do people know about these cartoons? The intarwebs? You can see them online? Oh, you can download them illegally. How much does that cost? Nothing? And how much do you want to charge for your DVDs? Twenty quid. Do you have any sort of legal protection to deal with the pirates? You don’t… but you hope that it will sort itself out eventually and that the goodwill of fandom will nurture your business. Hey… I’m so out.

Bespectacled Greek: My kids watch this stuff, I never thought there would be money in it! How big is the fan base? Wow, is that in millions? No? Er… so you’re telling me that number is in thousands? Blimey, you could fit that many people into one big hotel. What!? You do put them in a hotel! Listen, Great Train Journeys sells in the tens of thousands. Jade Goody’s Exercise Video bought me a new house. But the numbers you’re talking about… it’s not going to attract my investment. I’m out.

Dapper Pakistani: Maybe you could offer some extra incentives to encourage people to buy legally. Oh, you do…? Great. Commentaries, bonus video, interviews, that sounds good. And you can pick all that up cheaply? Great. But how does the BBFC feel about that? They charge you extra!? Six pounds a minute to “certify” a commentary track! And this makes you more competitive? I don’t think so. I’m out.

Bloke With Wacky Socks: My fellow Dragons are missing the big picture. Anime may be “taking the world by storm”, but the place to make money isn’t really in anime distribution. Instead, I’m going to buy shares in the Royal Mail, and then charge anime importers £8 every time they are hit by illogical and unfair customs duties. Basically, I’m going to tax fans for having interests outside the UK mainstream! I’m going to coin it in! I get money for doing nothing! I’m going to be a millionaire! Again! Ha ha ha!

Jonathan Clements is the author of Schoolgirl Milky Crisis: Adventures in the Anime and Manga Trade. This article first appeared in NEO #52, 2008.

5 thoughts on “Due Diligence”