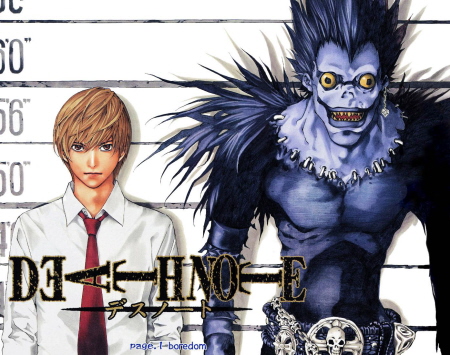 To Belgium, where one of the most chilling stories in the manga world continues to bubble beneath the surface. In late September 2007, two walkers in the Brussels Forest district’s Dudenpark investigated a strange smell. They stumbled across the mutilated remains of a human body and called the police.

The scene was cordoned off and forensics went to work. The body parts were catalogued and examined, and the police stumbled across something else. The two notes, scrawled in capital letters and multicoloured inks, bore a strange message: “Watashi wa Kira dess.”

It didn’t take long for someone to connect the dots. The scrawled papers were a reference to Death Note and suggested, at least to the Belgian popular press, that a manga-inspired killer was on the loose.

Two years on, the case is no closer to being solved, although the police (and manga fans) would rather wish it would just crawl away. For any detective, the events of the case are a reversal of many murder investigations. Someone has clearly died, although nobody has been reported missing. Meanwhile, the body parts are tantalisingly incomplete – a male torso and a pair of thighs, although forensics are still in doubt as to whether the pieces all come from the same victim.

If you’re a gutter journalist, this is fantastic. It means we could be looking at a manga-inspired serial killer, and it will fill up your newspaper for a month. If you’re a policeman, you pick at other parts of the facts. Why only those parts? Where is the rest of the body?

If you are a criminal profiler, you look at other issues. Why the rainbow-coloured writing? Why were the thighs shaved? Why were the cuts made with such surgical precision? Why choose this park, at the highest point of the local neighbourhood? Was it a symbolic act? A gay revenge ritual?

If you are a manga fan, you have other questions. Why “dess” instead of the more correct “desu”? That implies someone who does not speak Japanese, but has merely parroted a phrase they have heard on a DVD. And why Death Note? Very much a show of the moment, very popular with the late teens and early twenties. The kind of thing that you would expect to be popular with… college kids.

To their credit, the police were on to this very swiftly. They faced the prospect that this was not a murder at all, but a prank or initiation ritual. Those wacky medical students, with access to human body parts and clearly too much time on their hands. The rest of the victim’s (or victims’) body might be nowhere to be found because it was on a series of dissection tables in a local university.

But since nobody has come forward to admit this explanation, the so-called Manga Murder case remains open in Belgium. And since somebody in nearby Mons really is a serial killer, and has been hacking up murder victims for some time, the police took the Dudenpark discovery very seriously indeed. The time they were obliged to waste on it, in interviews, tests and analysis, is all time that could have been spent catching a real criminal.