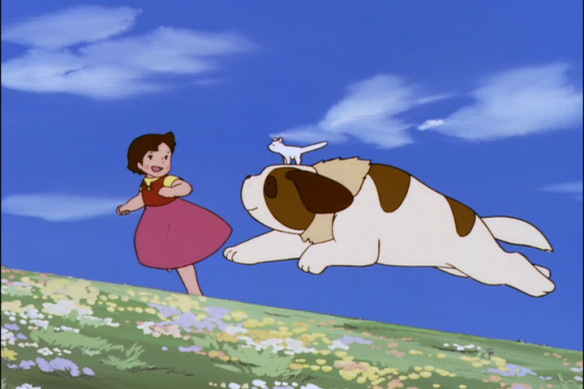 Over at the All the Anime website, I review Kaori Chiba’s new Japanese-language book on Heidi, Girl of the Alps, the landmark anime series that carved out an entire niche in evening programming.

“Chiba deals with the anime’s planning, the shooting of its pilot, and the crew’s location hunt in Switzerland, wherein Miyazaki, Takahata and their long-term collaborator Yoichi Kotabe descend like dervishes on the farmhouse of a baffled local family, demanding to photograph their kitchen table and their cows. From Maienfeld, they head up to Ulm and Frankfurt, soaking up the metropolitan imagery for Heidi’s later adventures in Germany.

“Chiba devotes ample space to the production of the first episode – the scoring of the music, the theme song, and the auditions for the voice actors, the character designs and the backgrounds. It’s only towards the end of the book that her account takes a darker tone, drawing on the complaints of the staff, particularly Miyazaki himself in many later articles and interviews, that television animation was a brutal, relentless, unending task, gobbling up talent and time. The animators put their all into Heidi, only to find that television networks greet its manifest quality with an indifferent shrug.”