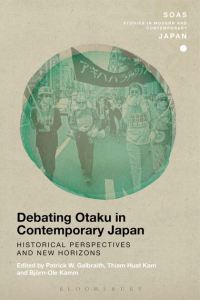 Over at the All the Anime blog, I publish a review of Galbraith et al’s Debating Otaku in Contemporary Japan.

“Eiji Otsuka, a man complicit in the coinage and dissemination of the term otaku in the first place, is furious that it has become such a thing, and regards the attention of researchers and the vainglorious bragging of the Japanese government as an air-brushing of history…. He is so angry, in fact, that his foreword to this book comes with a prolonged translator’s note pleading mitigation and indulgence, like some apologetic youth dragging a drunken uncle away from a bar fight.”