As the railroad slowly takes shape from Turku in the south to Vaasa in the north, construction bosses discover that their path is blocked by land belonging to the widow Laurila (Siiri Angerkoski), who will take some persuading. Unexpectedly, they find themselves leaning on the negotiating skills of Lapatossu (Aku Korhonen), an aging, workshy railway builder who reveals a previously unknown knack for disguises.

The Lapatossu stories were originally published at the turn of the twentieth century by the author Juho Nurhonen. The relation of these original tales, however, to Aku Korhonen’s portrayal of the character on film is tenuous at best, with only faint reminders that our easy-going everyman might be a noble fallen on hard times, or some sort of Holy Fool watching the modernisation of the Finnish countryside with wry bafflement. Lapatossu is an old builder on the new railway – in a triumph of unimaginative translation, the film can somehow be found referred to in English as The Old Railroad Worker. But there is so much more to him that that – he seems to slide with chameleon-like ease between the hard-pressed bosses and the happy-go-lucky navvies; he is respected by his fellow workers, and indulged by the cooks and housemaids.

Within the context of my film-by-film marathon of Suomen Filmiteollisuus productions, Lapatossu is a sudden burst of creativity and experimentation. In one scene, the Finnish slang flies so fast that Swedish subtitles sneak onto the screen, to help all those urbane posh people who might have trouble following the gags. Elsewhere, the dialogue takes on a naturalistic tone, with actors interrupting each other or visibly trying to stop themselves giggling at Korhonen’s onscreen antics, while the camera flits between conversationalists, apparently unsure of who is going to speak next. This film has plainly been shot in the short Finnish summer, and the crew make the most of outdoor locations, figuratively shrugging at minor glitches in foley, audio and focus. The music, meanwhile, is oddly terrible, unless the Helsingin Teatteri Orkesteri was somehow deliberately playing the score flat and tunelessly, in imitation of an ad hoc band of amateurs. 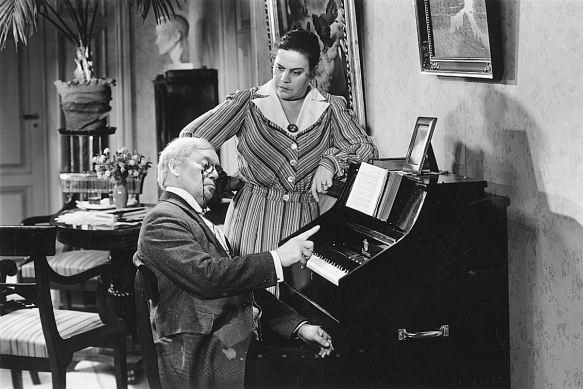 There are some notable departures in casting. Jorma Nortimo, once a recurring dastard, more recently a romantic lead, transforms himself once again into the foppish milksop Heikki, by the simple expedient of putting on a pair of spectacles. Aku Korhonen, who played several character roles for Suomen Filmiteollisuus with varying degrees of success, suddenly gets to shine here in the loveable title role, finding a new sidekick in Kaarlo Kartio as Vinski. Lost in the supporting cast since his star turn in Scapegoat (1935), Kartio gets to work as Korhonen’s foil, setting up numerous gags, and channelling Laurel & Hardy in a dance routine in which Korhonen camps it up by donning a shawl and playing the coquette. Korhonen is also visibly charming in his flirtations with the older actresses, shunting the usual half-hearted young-lead B-plot romance out of centre stage, to the extent that the fey Heikki’s ham-fisted wooing of the widow’s daughter Irja (Laila Rihte) is played almost entirely for laughs and cringes.

Lapatossu is somewhat defeated by the picaresque, episodic nature of its origins, as if a bunch of one-page vignettes have been clumsily stapled together until they bulk out to feature length. The saga of the missing cream is solved with broad humour when Lapatossu doses a jug with a strong laxative, while the widow Laurila is briefly won over when Lapatossu disguises himself as a visiting dignitary. But just when you think the film is done, Lapatossu and Vinski run away and join the circus for a pointless interlude in which he masquerades as a strongman.

Possibly because by the time this film was made, the railway had been a fact of everyday life for a generation, there is no sense imparted of the incredible engineering achievement of building a railway from south to north – Lapatossu and his fellow workers might as well be working on a building site. Taken out of historical context, Lapatossu is frankly forgettable, but it is a cut above most other Suomen Filmiteollisuus comedies of its era, and was made at a crucial point in history. Thanks to its 1937 success and the commissioning of two sequels, it and its leads were propelled to austerity stardom in the dark days of wartime. The title character, in particular, became something of an icon among the soldiers of the Winter War.