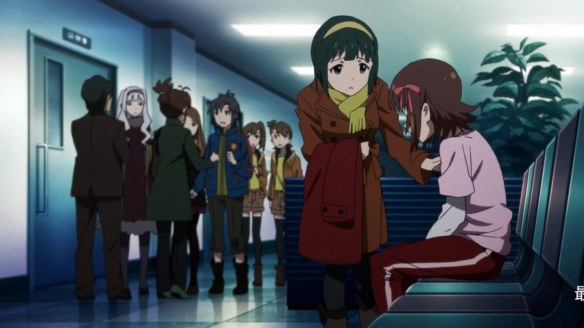 I hope nobody was coughing at Minamicon…? Yui Ishikawa’s announcement last month that she was cancelling her appearance at the Violet Evergarden premiere at the Glasgow Film Festival over infection fears seemed briefly like a slap in the face (or head butt), but was soon revealed as a reaction entirely in keeping with the Japanese government’s own directives on restricting travel. Anime News Network has been spattered with announcements of cancelled press launches and concerts, as pressing the flesh becomes a no-no. You knew it was bad when the Ghibli Museum shut down.

Kyoto, which has been rammed with Chinese tourists for the last five years, is suddenly quiet. The Shuxiangge hot pot restaurant in London’s Chinatown, where I fought to get an upstairs seat in January, put me by the ground-floor window in February, when I was outnumbered by the staff, And on Valentine’s Day, I briefly and accidentally booked a hotel room in Helsinki that very evening, when usually the place is chock full of tourists.

Japan’s extreme reaction is an attempt to deal with a virus that may have little to no effect on 83% of victims, making it easier for them to spread it during the two-week incubation period. But it’s also based on the economic brinkmanship that has characterised the last couple of years, with a huge degree of Japanese economic planning resting on the hosting and completion of a successful Olympic Games. They need to get ahead of this now, or it will bring down the government. [Time travel footnote: the Olympic Games will now take place in 2021].

In the spirit of the school shutdown, the Doraemon and Shimajiro films scheduled for spring break have now been postponed. I can’t say anyone is likely to be that bothered, since in the case of Doraemon, this has to be the third or fourth time they have recycled the same dinosaur plot in living memory. Meanwhile, in Malaysia, the government has advised wives to “speak like Doraemon” when dealing with their husbands in lockdown, because nothing gets you through a global pandemic like impersonating an incompetent time-travelling robot cat.

But in the most surreal anime virus story so far, Tiger Ye, a resident of Wuhan diagnosed with COVID-19 in January, has told the world’s media that watching Idolm@ster had helped him get through it all.

“I realised I needed some spiritual support or maybe I couldn’t make it,” he told Michael Standaert in the Guardian. “So I watched my favourite anime show and seeing their normal, happy lives, I thought I may have to say goodbye to this life forever. But watching the show, the heroine had troubles in the first half, but she finally made it and succeeded in her career.”

“So watching the show, I thought: I must make it if I want to see her next concert alive. This really encouraged me and gave me some relief,” he said, “along with the medicine.”

Jonathan Clements is the author of A Brief History of Japan. This article was commissioned for NEO #199, but events overtook it when the magazine was put on temporary hiatus owing to the lack of sales venues during the COVID-19 outbreak.