As Finland reels under increasingly oppressive Russian rule in the early 1900s, Robert Harmelius (Tauno Palo) dedicates himself to Finnish independence. Or rather, he talks about it a lot in order to impress his uncle’s housemaid Justiina (Regina Linnanheimo), and the pair of them become a pair of real activists, until uncle Fred catches them in bed together. That’s one form of activity that nobody was expecting, and Robert flees town, leaving Justiina discredited and pregnant.

Years later, Robert has changed his surname to the more Finnish-sounding Harmaalahti, and is a promising politician in the new republic, married to a singer, Hilda (Emmi Jurkka), and with a young daughter of his own. Fallen on hard times, Justiina is a housekeeper, and their son out-of-wedlock son Olavi (Leon Lähteenmäki) works as a gardener at the house to which Robert moves.

Their feelings are soon rekindled, leading Robert’s spurned wife Hilda to avenge herself on him by seducing Olavi. Nobody saw that one coming! Olavi throws himself off a cliff and bangs his head, and Robert prepares to shoot Hilda in revenge, only for Justiina to intercede. “If you want to avenge your son,” she breathes, “help us make a world where such women have no power!” 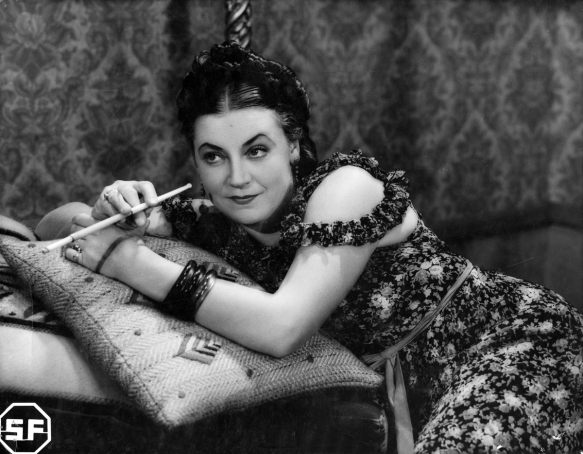 Er… singers? Vamps? Loveable curves? I am not sure how the creation of modern Finland is going to stop hearty cougars from chasing toyboys. We don’t even get to enjoy the seduction of Olavi, since prim censors in 1939 insisted on cutting 15 seconds of snogging from Eteenpäin elämään, which has not been restored in subsequent releases. I think that, deep down, there is some sense that Hilda is a representative of the tawdry, Russian-Swedish aristocracy, and Robert and Justiina’s love is somehow purer and more Finnish, worth fighting for… although apparently not at the time that Justiina could have done with any real support. The film from Suomen Filmiteollisuus was based on the 1937 stage play Justiina by Hella Wuolijoki, but lacks much of the bite and wit of her earlier Women of Niskavuori. Meanwhile, the film oddly keeps much of the limiting indoor settings – even the Civil War largely happens off-screen as a series of sound effects, while a bunch of Finns stare worriedly at some maps. People spend a lot of time in their drawing rooms, talking about Finnish independence instead of going out to get it.

It’s hardly the basis for a revolution, and in dragging Finland’s struggle for independence into a family drama about star-crossed young lovers, the film rather shoots itself in the foot. I can only imagine how it might play in a modern remake, which would surely focus on the put-upon Olavi’s teen trauma, while Robert would be presented as a heartless brute of a politician, ducking his responsibilities to the woman who has borne his child because of some sort of hand-wavy “oppression”. The Russians get the blame for everything, including Justiina’s bastard child, although surely Robert had a hand in it all. Well, it wasn’t his hand.

As the leading lady, Regina Linnanheimo is bafflingly stiff and ill-at-ease, as if she is being forced to act at gunpoint, with a face substantially craggier than some of her male co-stars’. Emmi Jurkka is far more vivacious and fun as the ivory-tinkling, chanson-belting Hilda, but we are supposed to hate her because she giggles a lot – she is entertainingly sultry, and comes oddly attended by two camp opera singers Andersson (Arvo Kuusla) and Oramaa (Ossi Korhonen), who seem to be the first markedly gay characters I have seen in Finnish film. Meanwhile, in the roles of Olavi and his half-sister Riikka, Leon Lähteenmäki and Marjo Penttala are the least convincing teenagers I have ever seen, plainly of similar age to the people who play their parents.

In everything from its breathless title to its addled approach to the founding of the Finnish republic, Forward to Life! is a poor show of a film. Released in January 1939, it would have merely a few weeks in the grim winter sunshine before it would be roundly trounced by Suomen Filmiteollisuus’s own February Manifesto and, soon after, Suomi-Filmi’s rival The Activists, two vastly superior works. They didn’t just get 15 seconds trimmed out; they were banned completely for decades, sure to be a sign of truly revolutionary films.

Jonathan Clements is the author of An Armchair Traveller’s History of Finland. He is watching every Finnish film ever made, so you don’t have to.