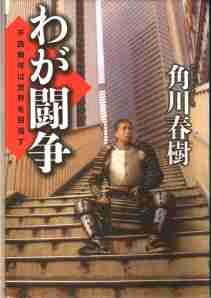 Over at the Encyclopedia of Science Fiction, the need to revise the entry for the blockbuster flop Virus led me to also write a new entry on its producer, the flamboyant, ever-entertaining Haruki Kadokawa. That’s him in the picture, dressed as a samurai on a Tokyo overpass, photographed by Annie Leibowitz, with a book title that’s the same in Japanese as Mein Kampf. Because if you’re that rich, you would, wouldn’t you?