In press junkets for his previous film Chinese Zodiac, much was made of Jackie Chan’s “retirement” from action films, somewhat to the actor’s chagrin. The 62-year-old Chan was obliged to run damage control on his own career, pleading that he was certainly going to make more films, but that his advancing years made him less likely to perform his own stunts or do anything mental. But you’d be forgiven for thinking it was business as usual in Skiptrace, in which Chan can be seen fighting his way through a Russian factory, leaping from a collapsing Hong Kong slum, and dangling from a man’s trousers on a perilous ravine zipline. It’s only when you look closer that you see the occasional stuntman substitution, or that Chan’s co-star Johnny Knoxville, a man famous for shooting himself out of a cannon or eating a goat’s testicles on many a Jackass, is volunteering to take some of the harder knocks.

As Chan’s foil Connor Watts, Knoxville initially seems to be appearing in two different movies, on the run from the Russian mob, and framed for murder by a Macao casino syndicate. Benny (Chan) is the weary Hong Kong cop sent to bring in the fugitive Watts, unaware that he is carrying a cellphone that would solve Benny’s decade-long quest to unmask the criminal kingpin known as the Matador. For reasons not entirely clear (if they can cross the border, they can surely get on a plane), the impecunious pair is obliged to travel by land from Irkutsk to Hong Kong, with a travelogue narrative that focuses almost entirely on either end of the 5000-kilometre journey, ignoring most of the central Chinese locations they would have had to cross in favour of the ethnic hinterlands of Inner Mongolia and the Guangxi Zhuang Autonomous Region. 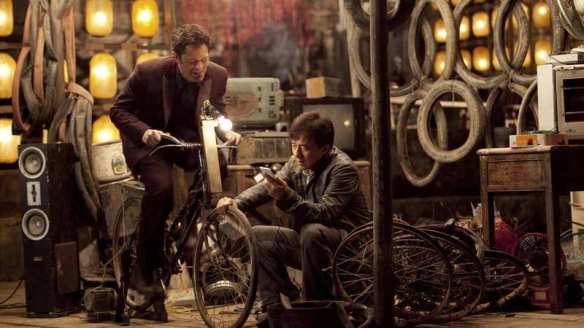 Chan and Knoxville traverse a bunch of picturesque settings – a lantern festival, cormorant fishing on the Yangtze, the mountains of Guilin, entire mountainsides of rice terraces – all as a backdrop to the formulaic knockabout action that has made Chan a global superstar. Critics in America have been quick to site this film in Chan’s late period in Hollywood, alongside other foreign buddy franchises like Rush Hour and Shanghai Noon. But Finnish director Renny Harlin has managed a remarkable evocation of the mood of Chan’s Cantonese movies of the early-1990s, such as Cityhunter and Police Story 3, when he was working with Wong Jing and Stanley Tong. Harlin’s film (or more aptly, its script) also inherits many of the flaws of that era – underwritten female characters, plotting that takes itself about as seriously as the clowning action sequences, and a condescending attitude towards anyone who isn’t ethnic-majority Han Chinese. The characters plough through local colour like tourists on a speedboat, inadvertently asserting privileged disdain, even as they document diversity. One wonders what the reaction would have been if he had made a similar road movie traversing the United States, and how various local communities would have reacted. Hahaha, the Navajo are all drunken brawlers; heeheehee, the Sioux are toothless swindlers; hohoho, those Negros sure love a good sing-song!

Parts of the film seem to have been flung together against the clock, including a couple of moments in which the actors shrug off sudden drizzle, and a closing act in which two scenes appear to  have been included out of order. Jokes about Chan’s inability to swim might seem tasteless in the light of the death by drowning mid-production of cinematographer Chan Kwok-hung. A recurring jump-cut motif propels the narrative along by discarding large chunks of exposition and development, but also papering thinly over plot holes. At least two key elements of the story – justice for the murderer Victor Wong (Winston Chau), and Knoxville’s shotgun marriage – are revealed as self-resolving problems for which the actions of the characters are entirely redundant. But this, too, is a faithful evocation of the breakneck pace of pre-Handover Hong Kong action films; Harlin’s movie is a note-perfect pastiche of Chan’s 1990s heyday, opening with a manga-in-motion series of comics cutaways, introducing the cast in a pop-art style. Fun veritably seeps out through all this movie’s cracks, from an opening sequence in which Chan initiates an attack on a bad guys’ hide-out, armed only with a bra and negligee, to a sequence in which Fan Bingbing tries and largely fails to conceal how much she is enjoying a fight scene in which she takes out her attackers with a taser and a fish tank.

There are several easter eggs for certain sectors of the audience. I failed to spot the Finnish flag that Harlin habitually hides in his films, but did note the snarling cameo for wrestling star Eve Torres Garcia, and the oh-so-meta moment when Knoxville, obliged to sing his way past an honour guard of tribal girls, chooses to belt out “Please Understand My Heart”, a Jackie Chan hit from 1991. The gangsters in pursuit, on the other hand, mumble their way through a half-hearted rendition of “You Are My Little Apple”, the novelty hit of 2014. And in an utterly bizarre musical interlude, Chan whips up a bunch of Mongols into a rendition of Adele’s “Rolling in the Deep”.

Meanwhile, in an odd moment of political cheekiness, Chan’s character expresses his desire to retire and run an alpaca farm, noting that these animals are a symbol of freedom. That they may be, but they are also a notorious icon of Chinese internet dissidence, striking an oddly right-on note for a man who has spent the last decade in alliance and cooperation with the authorities.

Strangest of all, despite a worldwide release in dozens of countries, Skiptrace has yet to appear on UK movie schedules, nor at time of writing has it been submitted to the BBFC. Harlin’s status as a local boy saw his film released in Finland last weekend, where I sat amid an audience of usually stoic Finns, laughing their tits off at was surely their first-ever Jackie Chan film. You can see this movie in the United States, in Holland, in Singapore… but it seems strangely absent from UK schedules. Is a distributor saving it for the Christmas feel-good rush, or has its kitchen-sink assembly of kicks in the goolies, an Adele sing-along, on-screen horse-poo  and white-water rafting on inflatable pig-skins failed to include anything that will interest a British audience? Something for everybody, even the Finns… but not the British…?

Jonathan Clements is the author of Mannerheim: President, Soldier, Spy, which is also a road trip about two bickering buddies, forced to cross China undercover. This article originally appeared on the Funimation UK site in 2016, but has since been deleted.