Ancient Black Ops: The 47 Ronin, a 2014 documentary in which I appeared discussing samurai matters, is also now available on Youtube. And if you are so inclined, you can also have the questionable pleasure of watching me dubbed in Spanish.

The World of Suzie Wong by Richard Mason is a glimpse of the world of 1957, when old soldiers could still talk of having had a “good war”, and the British Empire was still teetering on the brink. Kindle makes it possible for me to nab it within moments, although Suzie Wong is one of those subjects that I have heard mentioned all my life, but never actually encountered before – a bit like Fu Manchu and the Black &White Minstrels, it seems to have been airbrushed from history in more enlightened times.

Robert Lomax is filth in all but name (Failed in London, Try Hong Kong), a clueless wannabe painter in Hong Kong, who accidentally takes a room in the Nam Kok Hotel, which turns out to be a brothel. Readers of this parish may scoff, but are reminded that the Clements family also somehow managed to end up a few floors up from a knocking shop in Chengdu, so it’s not like it’s impossible. 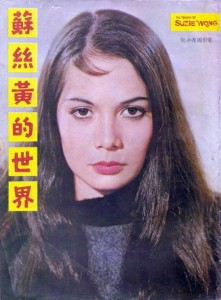 Lomax falls for Suzie, a wilful, proud bar girl with a half-caste baby, and much of the story is taken up with their long, long, looonnng courtship, occasionally interrupted by other suitors and various dramas among the other bar girls. Mason has a matter-of-fact approach to dealings at the brothel, and that, coupled with the coy requirements of 1950s censorship, turn his account into a far less prurient tale than one might at first imagine. He certainly seems to know his way around the etiquette of the red light district, and has interesting observation about the peculiar protocols of the girls, who, for example, deride any sailor who doesn’t pick one girl and stick to her for the duration of his stay in town as a “butterfly”. It encourages comparison with Akasen Chitai (Red Light Zone), Kenji Mizoguchi’s last film, shot in a realist style in Toyko’s brothel district around the same time, just before prostitution was criminalised in Japan.

Curiously, the leading man is presented as somewhat ignorant of the East, which is exactly what I would expect from the average hack cranking out a Hong-Kong-hooker-with-a-heart-of-gold novel. But Mason was an old Asia hand, having fought in Burma in the war, and drafted to learn Japanese as a POW interrogator. It’s thus all the more impressive that he is prepared to present his leading man as a callow, nice-but-dim posh boy, drifting from plantation job to would-be artistry in Hong Kong, and failing to read a single squiggle. I don’t think I would have been able to resist the temptation.

Meanwhile, his slice-of-life of 1950s Hong Kong presents tantalising glimpses of a small town overwhelmed by a massive refugee influx from over the border. Suzie herself is from Shanghai, and there are whispers throughout the book that the girls are women fallen on hard times, forced to seek any job they can in order to escape the even greater miseries of (we now know) the Great Leap Forward.

Lomax is just as much an outsider among the British expat community, which he regards as stifling and hidebound, not the least for its refusal to accept mixed-race marriages – when he approaches a consul for a wedding certificate for him and Suzie, the consul is actually surprised to learn that he is allowed to marry them. He also has some deeply odd things to say about oriental femininity, such as suggesting that the attitudes of Asian girls are designed to support masculinity, while those of European women are designed to destroy it.

Really. Presumably, by “destroying it” he means the unhelpful willingness of European women to have ideas and opinions of their own, thereby threatening to shatter the fragile worldviews of thin-skinned men.

I’d say that the book could never be written today (except that there’s one about Thai bar girls, called Paradise Lust, which is basically the same story, and many of the same observations, from fifty years later). But certainly modern readers would tut in indignation at the sense of entitlement of Suzie’s suitors, one of whom spanks her for daring to look at another man (like that isn’t her job). Although the book does attempt to present the girls’ case and the girls’ view, it is largely the tale of Chinese women available for rent, to largely uncaring and callous men, often cheating on their wives, who are themselves presented as ghastly termagants.

There have been two unofficial sequels, both of which seek to tell the story of Hong Kong as a whole through Suzie’s eyes. One wonders what a modern author would do with the same material. Guo Xiaolu, for example, author of A Concise Chinese Dictionary for Lovers, might take the title literally, and tell it solely through the eyes and words of Suzie herself, thick with detail about the China left behind and the intricacies of the Nam Kok, but as numb and uncomprehending of Lomax’s world as he is of hers.

Suzie Wong was adapted for the stage within a year of its publication (starring William Shatner in the initial theatrical run, imagine!), and then turned into a film. The book was apparently a best-seller, which perhaps explains why Richard Mason doesn’t appear to have worked all that hard at being a novelist afterwards – he died in 1997, living just long enough to witness the Hong Kong Handover, but despite listing him as a “novelist”, his obituaries only seem to come up with four books to his name, of which Suzie Wong was the fourth. In 1962, at 43 years old (my age), his writing career was apparently over, presumably because he was quids-in for the rest of his life. I might be wrong – other mentions of him online suggest that he had a day-job working for the British Council, so possibly lost interest in writing anything else.

Jonathan Clements is the author of A Brief History of China.

Posted on the BBC website on April Fool’s Day, and hence not attracting any attention until it turned out to be serious, was the news that China’s State Administration of Press, Publication, Radio, Film and Television had declared war on “borderline pornographic” Japanese cartoons such as Blood C, Highschool of the Dead, and Terror in Resonance. SAPPRFT promises to draw up a blacklist of proscribed Japanese cartoons, all the more to save Chinese streaming sites the trouble of licensing them.

Even in China, the news was greeted with a degree of hilarity. SAPPRFT, after all, was the same body that tried to ban time travel (fortunately only on TV, my time machine is still legal). But as the Qianzhen news site in south China pointed out, SAPPRFT was making the perennial error that has dogged anime all over the world for the last 30 years, confusing cartoons for adults with cartoons for children, and then making the false assumption that children would be watching them.

It’s Japan that’s really in SAPPRFT’s sights. Anime was dragged off-air in China in 2006, where it was proving far too popular. Anime continued to sneak in on video, since apparently Ghibli films didn’t count as evil cartoons. Then, a survey in 2008 concluded that 75% of Chinese undergraduates were watching anime on their computers. Television might have been stamped out, but anime continued to find an audience in pirate editions and on streaming sites. And consider that percentage for a moment: China generates seven million graduates every year – that’s a big audience.

Streaming sites didn’t count as television, so now they are on the hit list, not the least because of the titles listed in the SAPPRFT press release, only Terror in Resonance appears to have any legal presence in the People’s Republic – it’s got bombs going off in Tokyo, sure to entertain the kids. As for Blood C and Highschool of the Dead, both were released in Hong Kong and Taiwan – in other words, they are sneaking in across the border, unhelpfully subtitled in Chinese by the running dogs of capitalism. Long-term readers may remember a similarly absurd situation a few years ago, when Death Note was “banned” in northeast China, despite not actually being legally available there in the first place.

What’s going to happen? Nothing. Servers at Chinese universities will continue to host terabytes of torrented foreign media. Chinese fans will continue to watch anime on their computers, just now without paying a penny to Japan. And distributors everywhere are doing cartwheels at the thought of being able to say that their anime titles are now “banned in China.” Nothing will bump up audiences more than the idea that the cartoon they’re watching can excite such ire.

One wonders, however, if SAPPRFT has bothered to check the credits on Highschool of the Dead and Blood C, which feature listings for companies such as Xuyang and Xing Yue Animation, both based in Jiangsu province. That’s right: the horrible foreign cartoons that SAPPRFT is targeting were partly made in China.

Jonathan Clements is the author of Anime: A History (UK/US). This article first appeared in NEO #137, 2015.

[Time travel footnote: and here’s me in the LA Times, explaining why Attack on Titan qualifies as “pornographic”] 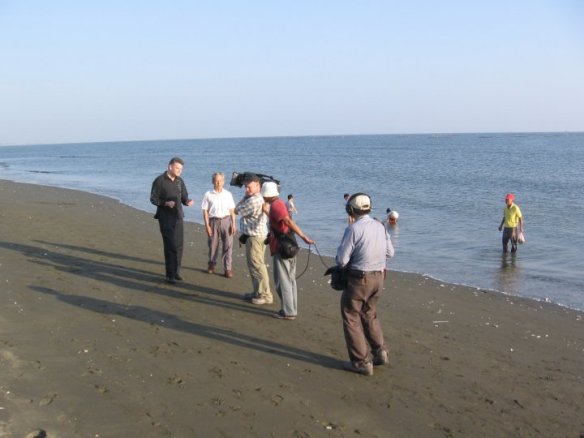 Koxinga: A Hero’s Legacy, the documentary I made with National Geographic in 2010, has turned up on Youtube. I am a talking head, all over it like a rash, because of my book on the infamous Pirate King of Taiwan.