I have long been a fan of the Harvard History of Imperial China collection, but series editor Timothy Brook has presented a star turn in awarding himself the Yuan and Ming dynasties. With deliberate and playful provocation, he lumps these two later periods together, instead of following in the footsteps of most other researchers, who usually cover the Mongol century of the Yuan as an addendum to the fore-running Song dynasty.

His reason for this is climatic – Brook identifies nine distinct periods of drought, flood, pestilence and famine, each of which constitutes a “slough” in fortune that sorely tests the imperial regime’s ability to manage its state. In fact, he collates the Yuan and Ming because, between them, they span the period that we now know to have constituted the Little Ice Age.

But Brook also displays winning originality in his choice of sources. He begins and ends with gripping accounts of sightings of “dragons”, triangulating this catch-all term for water-spouts, comets, tornadoes and earthquakes with his new-found data on climate change and natural disaster. He also maintains this thread throughout the book, returning to insightful new views of big data, such as the fluctuating number of Ming-era paintings that depicted snowy scenes.

One might be forgiven for thinking that the Yuan and Ming dynasties had been well and truly picked over. With strong grounding in untranslated sources, and intriguing new uses for old materials (do you know the 16th-century Chinese word for a sailor’s gay husband? “Rice-paddy” over “woman” if you ever need it.), Brook excellently demonstrates that history remains an ongoing and evolving practice, and that there is always something new to say.

Jonathan Clements is the author of Coxinga and the Fall of the Ming Dynasty, and biographies of Marco Polo and Khubilai Khan.

His grandfather was the bloodthirsty Mongol leader Genghis Khan, his mother a Christian princess. Groomed from childhood for a position of authority, Khubilai snatched the position of Great Khan, becoming the overlord of a Mongol federation that stretched from the Balkans to the Korean coastline. His armies conquered the Asian kingdom of Dali and brought down the last defenders of imperial China.

Khubilai Khan presided over an Asian renaissance, attracting emissaries from all across the continent, and opening his civil service to administrators from the far west. His life and times encompassed the legends of Prester John, the pinnacle of the samurai (and, indeed, the Mongols), and the travels of Marco Polo.

Jonathan Clements examines the life and times of this semi-legendary ruler, detailing the religious scandals and cultural clashes within his supposedly inclusive realm, and the long-running resistance to his reign in Japan and Vietnam. His short-lived “Yuan” dynasty barely lasted a century, but transformed China and the world for ever more.

It was the best of times, it was the Wurst of times. We’re back for the game of the year, the Eurovision Song Contest hosted in 2015 by Austria, the country that gave us The Sound of Music, Mozart, Falco and Hitler. It’s the Year of the Cloak, so dust off those shouting muscles.

We’ve already had to say goodbye to Moldova’s fetish cops and Finland’s awful punks. Categories still resting this year include readily identifiable mullet dresses, our popular dubstep dance-off, and the much-missed Buddha Jazz Hands. In what is one of the dullest Eurovisions in recent memory, your correspondent has a soft spot for Georgia, and is pleased to see Inga Arshakyan back for Armenia.

Step One: you will probably need to be quite drunk. Step Two: The following sights will be seen during this Saturday’s Eurovision Song Contest. Can you see them first? Remember to shout it out. Party hosts will need to keep score of who gets what first, or otherwise dish out the forfeits to those that aren’t quick enough. As ever, there is more than one key change, and plenty of orbital cleavage. Keep your eyes (or ears) open for any of the following. And when you notice it, SHOUT IT OUT!

In no particular order, in Saturday’s final you should look out for:

(*swaying one’s head from side to side in a snakey fashion.).
(**ostentatious cleavage sufficient to see from a satellite in orbit, which, according to Eurovision bra consultant Tom Clancy, requires a minimum of C-cup).

This year, Australia is sending an entry, although they have failed to send anything suitably Rolf Harris, Aboriginal or Mad Maxy. Poor show, Australia. You’re taking this far too seriously. If you’d sent a blind mutant rock guitarist on the back of a truck with a flamethrower, you might have been in with a chance.

Apologies to American readers, who will have to just imagine what the world’s biggest, gayest song contest is like. Just imagine, for one day every year, Europe gets to behave the way that Japan does all the time.

If you are using this I-Spy list this year, please do let me know in the comments so I can see how far it travels.

[Not hard enough for you? This game is also available in Finnish.] 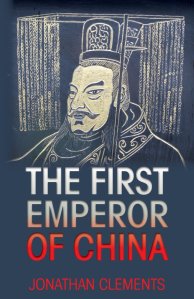 In 1974, Chinese peasants made the discovery of the century… Thousands of terracotta soldiers guarding the tomb of a tyrant.

Ying Zheng was born to rule the world, claiming descent from gods, crowned king while still a child. He was the product of a heartless, brutal regime devoted to domination, groomed from an early age to become the First Emperor of China after a century of scheming by his ancestors. He faked a foreign threat to justify an invasion. He ruled a nation under 24-hour surveillance. He ordered his interrogators to torture suspects. He boiled his critics alive. He buried dissenting scholars. He declared war on death itself.

Jonathan Clements uses modern archaeology and ancient texts to outline the First Emperor’s career and the grand schemes that followed unification: the Great Wall that guarded his frontiers and the famous Terracotta Army that watches over his tomb.

Published in 2015, this revised edition includes updates from a further decade of publications, archaeology and fictional adaptations, plus the author’s encounter with Yang Zhifa, the man who discovered the Terracotta Army.

Available now in paperback (US/UK) and on the Kindle (US/UK).

Now up in the online Encyclopedia of Science Fiction, my justifiably massive entry on the Japanese author Yoshiki Tanaka. Despite being a familiar name to anime fans and manga readers, this is the first time anyone has published an overview of his work, and even this 2500-word behemoth misses out a lot of his detective fiction and Sinology publications.

However, there’s plenty there on The Legend of the Galactic Heroes and the Heroic Legend of Arslan, as well as his lesser-known works like the Victorian Horror Adventures and Red Hot Dragoon.

My article on the strange case of Hokusai’s daughter, an artist in her own right who has been largely airburshed from the historical record, partly with her own collusion, is now up on the Anime Ltd website. It’s a fascinating story of art and attribution, with strong resonances in the modern anime business.

The idea of rekishi-gyaru (history girls) has come up before in a few Manga Snapshot columns – a supposed market sector of young, educated women who are as nerdy about historical drama as Naruto fans are about ninja. The latest anime from Production I.G seems squarely aimed at them, as well as a whole world of overseas anime lovers and Japanophiles.

9th May sees the Japanese premiere of Miss Hokusai, which charts the life and times of Oei, the artist who laboured tirelessly as an assistant and sometime replacement for her famous father. Hokusai père was the printmaker who created the iconic Great Wave Off Kanagawa as well as the tentacular picture usually known as The Dream of the Fisherman’s Wife (now gracing Peggy’s office in the final episodes of Mad Men), and the sketchbooks or doodlings that eventually lent their name to the entire medium we now call manga.

Based on an obscure 1980s comic by Hinako Sugiura, Miss Hokusai looms in on “her-story”, that ever-growing genre that highlights forgotten ladies. The question always remains just how much of Hokusai’s work was actually done by his daughter – letters remain extant in which he states his pricing policy, and notes that clients can have him for one fee, or Oei at a discount… not unlike the way that late-period Studio Ghibli started choosing its directors!

But Miss Hokusai is also a clear entry in the new scramble for superiority left by the shuttering of that very same Ghibli. With Hayao Miyazaki retired (again) and Isao Takahata unlikely to ever make another film, the race is on for the anime high ground. Take my word for it, all around the world there are distributors who have made a tidy profit on Ghibli movies for the last decade, who have suddenly seen their cash cow put out to pasture. Where are they going to find their once-a-year classy film to draw in the twittering classes and pad out film festivals with something quirky and Japanese? Where’s their annual dip into the fan market and mainstream cross-over?

For those who thought the whole thing was a two-horse race between the consistently excellent Mamoru Hosoda and the randomly brilliant Makoto Shinkai, Miss Hokusai’s director Keiichi Hara has turned out to be a surprise contender – leaping out of journeyman work on Crayon Shin-chan with the acclaimed Colourful, and now this considered, self-consciously classy evocation of Tokugawa period glamour. Worthy and classy, Miss Hokusai is a dream come true for distributors and exhibitors, and hopefully for audiences, too. But this is going to be a long contest before the winner is declared.

Jonathan Clements is the author of Anime: A History. This article first appeared in NEO #136, 2015.