From Admiral Togo: Nelson of the East, by Jonathan Clements. Available now in the UK and soon in the US.

Togo the former samurai was brought face to face with a development of the new age – the motion picture. La Bataille (in America, Danger Line) directed by E.E. Violet, was the international star-studded epic of its day, the tale of the Japanese Marquis Yorisaka (Hayakawa Sessue) who suspects his wife of having an affair with the English captain Fergan (Felix Ford). The vengeful Yorisaka has Fergan transferred to his ship, and when wounded in action, orders the neutral Englishman to take charge of the ship. The film was an unabashed weepy, a refashioning of Othello, in which the wounded Marquis later discovers that his wife had been faithful to him, and seeks a tearful reconciliation. However, when screened to an audience of Japanese dignitaries by the well-meaning Viscount Ogasawara, the film’s scenes of naval combat had an unexpected effect on Admiral Togo. The sobbing Togo bolted from the theatre, confessing afterwards to Ogasawara: ‘Many of the men around me died in just that way. Do you think I can keep myself from weeping when I see the sight? It does not matter if it is a movie picture.’

And for readers in the London area there’s still time to book yourselves a place at my free lecture on Wednesday at the Japan Foundation, Johnny Chinaman: Admiral Togo and the British. I guarantee at least one joke at the expense of Essex. 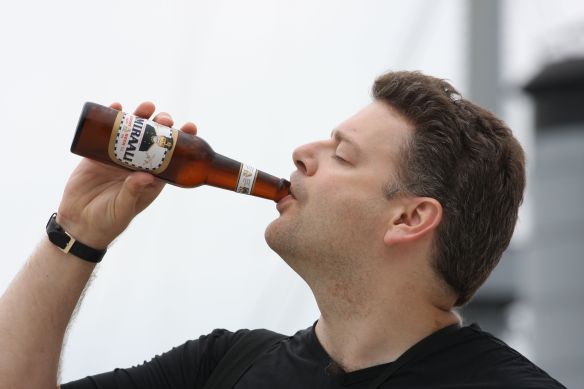 This is probably not going to be approved as the author photograph for my biography of Admiral Togo, even if it does combine many crucial elements. That vessel in the background is his flagship, the Mikasa, which trounced the Russian fleet at the Battle of Tsushima. The statue is Togo himself. The beer is Amiraali, an obscure Finnish brand from the 1970s that once featured a bunch of famous Admirals on the label. The fact that Togo was on it charmed the Japanese, who now appear to brew it under licence just so they can sell it in Mikasa Park. And then there’s me, stuck in Yokosuka with an accidentally-opened bottle of Togo beer, in front of Togo’s statue. With my reputation…

Getting material from Japan is significantly easier these days. Otaku.com or Amazon Japan will deliver to your door. It’s true, I may have accidentally just spent £200 in a Japanese bookshop, but that was a moment of weakness. Writers still have to do the legwork. If someone can find out 95% of the necessary information just by sitting at their computer with a credit card, it behoves the professional author to go that extra mile. In the case of Togo, I was clambering over his battleship photographing the makers’ stamps on steel girders, measuring the thickness of the armour plating around the helm, and getting a picture of his famous “Z” signal, which still flies from the Mikasa’s mast every day.

This trip to Japan has incorporated several projects. I have been acquiring photographs to adorn two books that are already complete and scheduled for publication in 2010, Admiral Togo and A Brief History of the Samurai. I am also amassing research for three other books that I hope to write one day, as soon as someone is prepared to pay me for them. And of course, I have picked up enough manga to keep my Manga Snapshot column for another year, along with a stack of books on anime history.

That personal touch is still necessary. Not only for getting the photographs of particular sites, but for pacing over the ground where history happened. Last month, I went to the site of the Battle of Yashima, and came back with no photographs, no souvenirs and no books. But I did come back with a sentence to add to my forthcoming samurai book that would never have occurred to an author who had not been there himself to observe the local geography,

In recent years, I have become addicted to small museums. If I am in a new place, the first place I run to is the little showcase of local history, because that’s where I am going to find the books without ISBNs that Amazon doesn’t carry. That’s where I’ll find the privately printed pamphlet by the local retired schoolmaster, detailing folklore or local legend that hasn’t made it into the history books. Japanese museums often have giveaway newsletters publishing new theories or research on an irregular schedule. When I was in the tiny town of Hondo, on the Amakusa archipelago, the local museum chief Kenji Kameshi gave me a huge stack of them, representing several years of data and research on the Shimabara Rebellion, too new for the history books.

This all places interesting demands on my itinerary. Taxi drivers are baffled to discover that I am prepared to travel three hours to an obscure hill in the middle of nowhere, and rarely understand that a single photograph of the right hill will pay for the entire trip. There’s no point in me going to a major museum if it won’t allow photography, but an out-of-the-way venue with a single interesting piece is worth my trouble if it’s a relevant object.

Nine times out of ten, when I tell people I am a writer, they don’t believe me. I have lost count of the number of times that I have to explain, no, that I am not a teacher, no, not a student, no, not a journalist. I am a person who writes books. Not a person who thinks he does, or who would like to one day, but someone who genuinely gets paid to sit down and tell stories about long-dead pirates, empresses and admirals. With pictures. Where possible.