“Americans will dump all their trash on another’s doorstep and then, a few moments later, show up and say they’re there to help you clean up and that it’s all for your own good.”

Chen Qiufan’s endlessly inventive near-future tale The Waste Tide begins with echoes of Neal Stephenson’s Zodiac and Ben Elton’s Stark, pitting ecological protestors against a system that is already showing signs of terminal decline. A tense, action-packed scene of shipboard monkey-wrenching shows the high-stakes game being played out on the seas, but it’s a later, quieter scene that really establishes the ghastliness about to unfold. A lobster served at a Chinese banquet has three pincers and a carapace that has been repaired, as if diners are now gorging themselves on invalids and mutants. It doesn’t look good, no matter where you are on the food chain.

Well, unless you live on Silicon Isle. This south Chinese coastal enclave has become a world leader in e-waste recycling, a ready recipient of poisonous junk as part of a ploy to grab useful materials. There’s gold (and platinum, and copper) in them there circuit boards, as long as you don’t mind poisoning the local environment when you harvest it… as long as you don’t mind the miserable, dangerous working conditions. 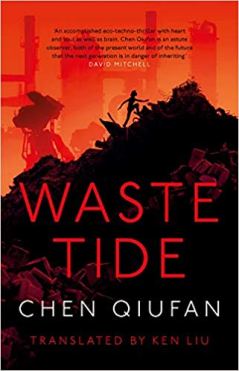 Scott Brandle is a Dante-quoting rep from an American recycling company, who gawps at the pall of smoke from PVC fires, and the zombie-chic sight of an abandoned prosthetic arm, twitching on the scrap pile. But Brandle is no Old China Hand (sorry), he’s an observer, drinking in the sights of a surveillance state that has invaded the very bodies of its inhabitants, not only with environmentally unfriendly prosthetics, but with RFID chips that are the only things to ward off the guard dogs in your local district’s frequency.

It’s his guide, Kaizong, who is soon revealed as the true hero, a local boy made good, returning to his hometown to confront old ghosts and new problems, seeing Silicon Isle through the eyes of his foreign charges, reminiscing about his American college days in order to allow for moments of incisive infodump. Or is he? Because by the second part of the book, the point-of-view switches to Mimi, a lost girl from the underclass, whose memory is briefly transferred into the intelligence systems of a giant robot, and who has trouble readjusting to being back in her own body. If that sounds curiously “anime”, then it’s not the only playful echo of foreign science fiction in a story that still remains quintessentially Chinese, even as it tips its hat to Akira and All Tomorrow’s Parties.

Chen’s grasp of China’s future remains as chilling and believable as in his acclaimed short stories such as The Fish of Lijiang. Internet entrepreneurs offer online banking in the afterlife, dovetailing the virtual environments of online gaming with an artful religious swindle. A canny trash-comber slices out the still-working cybernetic vagina from a Japanese sex doll; superstitious locals seek shamanic help to deal with what is clearly an envirogenic disease; a factory girl knows nothing about the opposite sex, except that which she has learned from TV dramas. Repeatedly, there are allusions to Earth as a place where the Chinese have nowhere left to run – unwelcome in Australia or the United States, they drift homewards, to the trash heap of their ancestors. Wireheads download nostalgia apps that threaten to give them brain damage, but give them a moment in which they can wallow in how things used to be.

“You are what you eat,” observes Kaizong, in a world where everyone is ingesting granules of plastic, chemical poisons and carcinogenic additives. Capitalism has advanced to the stage where a tour guide will wait for a bribe before trying to rescue a drowning child, and sustained development projects are decried as “legalised looting.”

Translator Ken Liu, any Chinese author’s dream choice, has plenty of fun not only with Chen’s Mandarin, but with the echoes within it of a greater diversity within China – Cantonese slang and Teochew regionalisms. As in the controversial film Sap Nin, voice recognition software has advanced to the stage where it can pick up Mandarin, but southern Chinese topolects with their eight tones and sandhi slides are still beyond it. He also diligently footnotes those parts of the text that he doesn’t expect foreign readers to understand – references to Martin Luther King and Tennyson pass without comment, but when Kaizong alludes to a quote from the Dao De Jing, or a plant only found in south China, Liu has a hyperlink to hand.

Chen’s text gives Liu ample opportunity for cutting observations and satirical clangers – starting with Brandle, a visitor from America who’s tried to bone up on China by reading an “idiot’s guide”, and who is sometimes addressed as Mr Scott. He picks the blandest options on the menu, in what might have been a gentle dig at foreign tourists, except in Chen’s world, this is the only way he can avoid heavy metals.

The tale is set thirty years in our future – a gap the same size as that which separates our present from the Deng Xiaoping reforms that ended Maoism. When it was written in 2013, China was the destination for much of the world’s recycling. This open-door policy was suspended some time ago, causing massive jams and backwashes in many first-world recycling policies. Reporters are finding plastics and chemicals in Ghanaian chickens and Arctic seabirds, and my social media feed is clogged today with stories of environmental catastrophe. Chen’s apocalypse is hence both prescient and familiar – evocative in places of Leslie Chang’s Factory Girls (2008), Eric Tamm’s The Horse That Leaps Through Clouds (2011) and Paul Midler’s Poorly Made in China (2011), and also of the machinations around the suppression of the SARS virus. But that is something that Chen has always excelled at: telling true stories in the cloak of fiction. When his factual, historical discursions suddenly veer off into fiction, the line was so fuzzy I had to Google it just to be sure.

Jonathan Clements is a Contributing Editor at the Encyclopedia of Science Fiction, and the author of A Brief History of China.