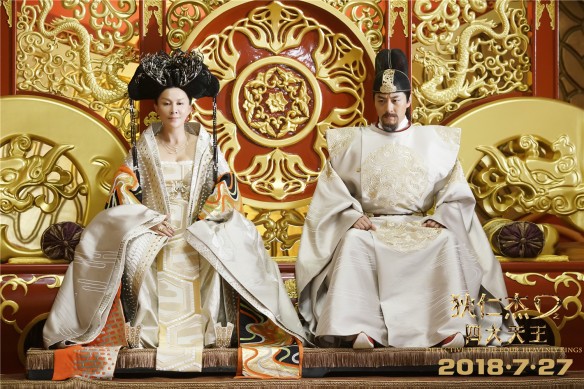 From Wu, by Jonathan Clements, available in the UK and the US. Recommended reading if you want to get the most out of Tsui Hark’s new Judge Dee movie, in which Empress Wu launches a vendetta against her former ally.

Judge Dee was rounded up with a number of other officials, and escorted to the investigators’ head office by the Gate of Beautiful Scenery. Lai Chunchen informed his captives that they had one shot at mercy – under plea-bargaining terms that Empress Wu had recently approved, anyone who immediately pleaded guilty could have their sentences commuted from execution to banishment. With that in mind, Lai Chunchen asked Judge Dee if there was a conspiracy. Dee’s reply was blunt and sarcastic:

[Wu’s] Great Zhou revolution has occurred, and ten thousand things are changing. Old officials of the Tang dynasty like myself are soon to be executed. You bet there’s a conspiracy!

Lai Chunchen would have preferred a straight yes or no, but took Judge Dee’s response to be in the affirmative. Dee was locked up for processing, although his stance managed to impress some of his captors. One investigator, doubting very much that Dee would be detained long in exile, asked him if the judge would put a good word in for him on his return, to which the judge responded by literally banging his head against a wooden pillar while calling the investigator a series of rude names.

The Judge, however, was not going to go without a fight. Waiting for a moment when he was left alone, he wrote a letter to his son on the inner lining of his jacket, and then prevailed upon his captors to take the jacket back to his home, so that his family could take out the winter padding.

On finding the secret message, Dee’s son immediately applied for an audience with Wu herself, and showed the empress the accusing letter. Lai Chunchen was called to explain himself, but argued that the letter was a forgery, since he had no record of the judge’s clothes being sent back to his house. There, Dee’s case might have foundered before it could have truly begun, but for a slave who approached Wu himself. The ten-year-old boy was one of many palace servants who owed their position to the alleged misdeeds of their elder family members. Uncaring that his words could lead to his own torture or death, the boy announced that his family was innocent, and that he lived his life as a slave solely because of the persecutions and lies of the ‘cruel clerks.’

This dramatic turn of events forced Wu to summon Dee to the palace to explain himself. She asked the judge why he had pleaded guilty in the first place, to which Dee replied that it was the only way he could avoid torture and death”

From Wu, by Jonathan Clements, available in the UK and in the US. Tsui Hark’s forthcoming Dee movie is out in Asia next month. You can never have enough films about Empress Wu, and in depicting Dee as a young man, they’re leaving things way open for many sequels.

Another loyal official was the popular magistrate Judge Dee (Di Renjie). Posted to the remote western Gansu region, he had enjoyed the support of both Chinese colonists and the local population of non-Chinese. His career suffered a series of setbacks due to the enemies he made at court, and by the late 680s, he was serving as a magistrate in a remote southern posting. Judge Dee arrived to find a prefecture in chaos, with many administrative personnel carted away for show trials, while armies of secret police terrorised the population.

Wu’s secret police might have been behaving like storm troopers, but this was not necessarily with her knowledge or approval. In secret, Judge Dee wrote a letter to Wu herself, complaining that he was witness to daily persecutions of innocent citizens, but that if he protested, the secret police would be sure to frame him for an imagined crime. If, however, he remained quiet, then he would be doing a disservice to Empress Wu, since she would be held ultimately responsible for the crimes that were being committed in her name. Instead of reacting with the umbrage that her enemies would have us suspect, Empress Wu ordered for the release of many of the unjustly accused, and commuted the sentences of less clear-cut cases from execution to banishment.

Judge Dee would continue to fight for justice against some of the worst of Wu’s hatchet men. When a military governor took over the province, Judge Dee stood up to him directly. His case, like that of Xu Yugong’s back in the capital, was that the people were being punished for the actions of a handful of aristocrats. In fact, in the case of his own locality, peasants who had been oppressed and victimised by would-be rebels, forced on pain of death to carry out their bidding, were now being similarly pressured by the investigators. In fact, Judge Dee went so far as to suggest that the secret police were doing more damage in his region than the rebels ever had. With bullish predictability, the governor wrote to Empress Wu, claiming that Judge Dee was guilty of corruption. He was thus rather surprised when the reply came back, ordering him sent away to a distant and unpleasant posting, while Judge Dee was promoted with a summons to serve at the court of Luoyang itself.

The most evil woman in Chinese history or a medieval Cinderella? Jonathan Clements examines the life and films of Empress Wu.
END_OF_DOCUMENT_TOKEN_TO_BE_REPLACED