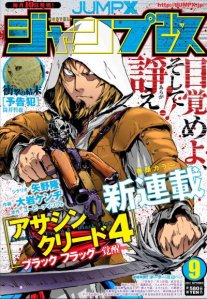 My article about the Assassin’s Creed manga, seemingly disowned by the original author, but smuggling in a distinctly Japanese bit of Mary Sue fan fiction, is up on the Manga UK blog.

I don’t write about Japanese comics very much online, as much of my monthly efforts go into the ongoing Manga Snapshot column in Neo magazine. This would have appeared there, too, were it not for some logistic issues that prioritised other titles ahead of it.