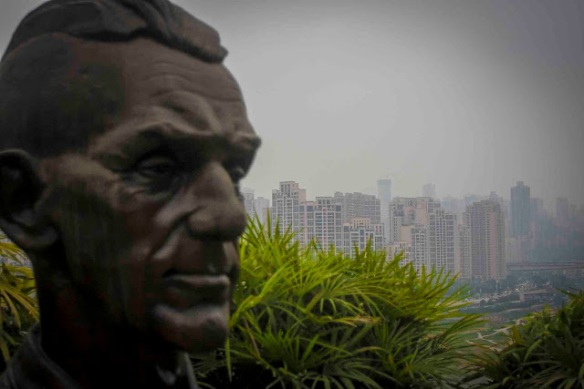 But why, I hear you ask, would anyone take a ridiculously hilly bend in the river, a thousand miles inland in jungle conditions, and build a massive city there? Everywhere else I have been in China has been carefully built on flat ground. Chongqing is like the map you delete on Sim City because you can’t work out where you are going to put any roads.

Well, for one, this is a bridging point for the Yangtze. Tankers stacked with containers can make it this far on the river, which is itself an amazing thought, thanks to the Three Gorges Dam downriver. But historically, Chongqing only ever flourished where there is no other hope for anywhere else in China. It was first conferred with city status in the Southern Song dynasty, when a game of musical chairs with the refugee Chinese emperors suddenly turned its local princeling into the ruler of what was left of China. And most famously, in the twentieth century, with the Japanese running riot all over the east coast like an outbreak of the walking dead, Chongqing was jury-rigged as the temporary capital, bastion of the Nationalists, kept alive by the infamous Hump airlifts across the Himalayas, which is why there is a wreck-strewn gorge in India called Aluminum Valley.

Chongqing, or Chungking as it was romanised back then, spent half a dozen years as the last hope of free China, landlocked and surrounded. Chiang Kai-shek was the general in charge, although all his dealings with his American supporters were smoothed by his wife, Soong May-ling, who had studied in America and spoke perfect English with a sexy Southern accent. Their best-known unit was the American Volunteer Group, a.k.a. the Flying Tigers, who were formed in secret in Burma in 1941 by “resigned” American pilots, and were hence ready for action a mere fortnight after Pearl Harbor, shooting the Japanese out of the sky in Kunming.

Regular readers of this parish will know about my obsession with the Flying Tigers, although it has never turned into a book because Daniel Ford has already written one that says everything I would say about them. The backs of their flying jackets were sewn with a blood chit, bearing the Nationalist Chinese flag (now only seen in Taiwan), and an oddly poetic statement in Chinese: “From beyond the ocean, he comes to aid in the Celestial war. Soldier and Citizen alike, aid and protect him.” It’s tough to translate; some will take issue with my version, but the choices of wording even in Chinese are a bit quirky and classical.

This is all going to come up again very soon in the media, since the new Bruce Willis film is called The Bombing, and is about the 100,000 people killed by Japanese air raids in wartime Chongqing. No, I can’t imagine why that has suddenly gone into production with Chinese money this year.

I went to the former home of Joseph Stilwell, whose association with China began in 1911, and who was a military attaché in Beijing in the 1930s. He was sent back to China in WW2, over his own protests, because he was the only general Roosevelt had who could speak Chinese. And so he was stuck in Chongqing for several years, arguing with the Flying Tigers and getting increasingly exasperated with Chiang Kai-shek. There is a lovely photograph of him, Chiang and Soong May-ling, cracking up over some joke or other in the garden. The official portrait of the three of them has them all looking serious, but it’s the outtake that makes them all look human, pissing themselves about some long-forgotten fart joke or similar tomfoolery. Stilwell’s otherwise caustic sense of humour earned him the nickname Vinegar Joe, although he was also known as Uncle Joe, largely for his hatred of pomp and ceremony, and his insistence on wearing a uniform without rank or insignia.

His home is a bunker-like block of 1920s chic, set in a hillside on one of the many ridges overlooking Chongqing. It is refreshingly off the beaten track. I cause a traffic jam on the winding mountain road simply by stopping outside to pay my taxi, and inside there is a baffled caretaker washing a cabbage, next to a litter of mewling ginger kittens. Within, the house is wreathed in a jungle of creepers, and surrounded by banyan trees and palm trees, fizzing in the heat. It is a welcome change from the nonsense of so many other Chinese tourist sites, many of which appear to have been designed by the same committee who think that everything needs a shopping mall and a car park. 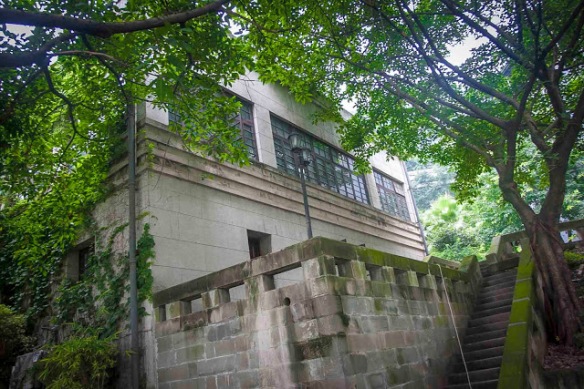 The exhibition inside includes details of Stilwell’s career, but also pushes his involvement with the Dixie Mission, an abortive attempt by the Americans to collaborate with the Communists, which was called off in 1947. The Chinese still remember, however, that the plane that flew in to Yan’an to evacuate the Americans came loaded with medical supplies to leave behind. Actually, they remember an awful lot about Stilwell, and there is an inscription on the wall about how when the guns are silent and the smoke has faded, only friendship remains.

Across the road, situated in such a way as to make Vinegar Joe spin in his grave fast enough to power all of Chongqing, there is a museum dedicated to the Flying Tigers, the air group who were a royal pain in his arse all the time he was in China. The staff were oddly fluent in English, as if they are used to coach parties of US servicemen rolling up to hear all about the American Volunteer Group and their shark-nosed planes.

I couldn’t resist buying some Flying Tigers tea from the gift shop and a couple of books, although I did balk at the crappily reproduced Flying Tigers T-shirts and baseball caps. I also bought my very own blood chit, advertising me as a man who has come from beyond the sea, although it does so in a pinkish manner that suggests it was run off on a laser printer. I also bought a book about the Hump airlifts, because I find them oddly interesting. There has been quite a lot written about them – the Berlin Airlift was masterminded by Hump veterans – and as the Hump exhibition at the Zhang family mansion in Changchun also mentioned, they didn’t get a lot of glory because there isn’t really a dramatic narrative in simply delivering fuel and fags to a bunch of soldiers, even if doing so involves caroming through narrow canyons in the Himalayas. Who am I kidding, it would make an awesome movie, particularly these days, when special effects could show all the crashes. I am rather surprised Hollywood hasn’t got involved already, since one Arnold Spielberg was a radio-gunner in a B-25 squadron in India, and his son Steven has become something of a name these days. The Hump, for what it’s worth, was set up by Colonel Merian C. Cooper, better known to posterity as the producer of King Kong, although I know him better as the chief of staff for Claire Chennault of the Flying Tigers.

Jonathan Clements is the author of Modern China: All That Matters.