Anime schoolgirls are a distinctive breed. Lithe and long-limbed, these sailor-suited sirens are prone to demonic possession, often found with magical powers, and quite likely to be martial artists. Any resemblance to real-Japanese teenagers is purely coincidental. But then again, once in a while someone in the live-action world will wonder – just how difficult would it be to try this kind of story with real girls…? 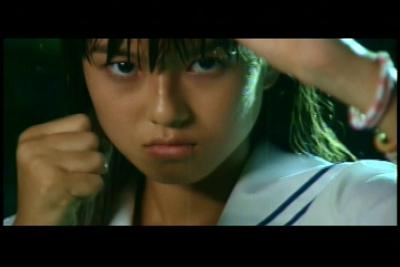 Ever since she was bullied as a child, Mann (Jun Matsuda) has nurtured her own natural abilities in the martial arts. A few years of living abroad in Hong Kong and Thailand have allowed her to hone her skills in kickboxing, which come in handy on the tough streets of Shinjuku. Well, there’s tough and there’s tough. The bars and accessory shops are hardly mean streets, but it’s still the home turf of gangs of sailor-suited schoolgirls, and they’re fighting over their territory.