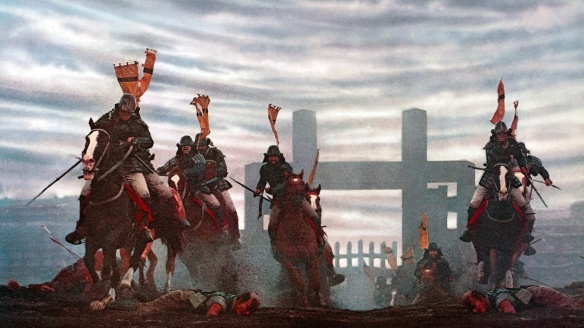 It was a running joke that when Japanese interviewers would ask Akira Kurosawa what his favourite film was, he would always reply: “The next one!” His answer changed in the 1980s, when instead he would say simply: “Ran.” Released in 1985, this epic, lavish samurai drama was intended by Kurosawa as his final word. Although he would in fact go on to make three other movies, he genuinely thought that this time he was going out with a bang.

Kurosawa saw himself in the character of Hidetora (Tatsuya Nakadai), an aging lord who, King Lear-style, tries to partition his realm between his three sons. The youngest, Saburo (Daisuke Ryu), scoffs at his naive idealism, and is banished. But Saburo is right. Hidetora soon runs into old enmities long thought forgotten. His rise to the top was ruthless and blood-stained, and now we see his karma coming back to haunt him. His daughter-in-law Kaede (the fantastically swivel-eyed Mieko Harada), wants revenge for the deaths of her own family, and turns his eldest son Taro (Akira Terao) against him. Before long, Hidetora is on the run from his own children, as they annihilate each other and the realm he helped to build. It is chaos, turmoil, tumult – in Japanese: Ran.

But not long before this triumphant return to form, despite being garlanded with accolades all around the world, Akira Kurosawa couldn’t get arrested in his home country. He had only made three other films since Red Beard (1965), the troubled production that cost him his friendship with his muse and leading-man of choice, Toshiro Mifune. His directing contract with Toho Studios had ended, throwing him at the mercy of the free market. After the box office failure of Dodesukaden (1970), he had even tried to kill himself.

Help arrived from unexpected quarters. In 1975 he directed the acclaimed Dersu Uzala, in Russian, in Russia. There was surely a bitter taste in its Best Foreign Feature Oscar for a Japanese director who had literally been sent to Siberia. But just as the noise over Dersu Uzala was dying down, George Lucas scored an international hit with Star Wars, proclaiming in interviews that one of his inspirations had been Kurosawa’s 1958 adventure movie The Hidden Fortress. Lucas and his similarly wealthy colleague Francis Ford Coppola came knocking, offering to bankroll the foreign release of Kurosawa’s next film, and thereby stumping up enough cash for even the timid Toho to take a punt. It was the ultimate in geekery – rescuing one’s student idol from the bargain bin of history. The resulting film, Kagemusha (“The Shadow Warrior”) was one of the top Japanese films of 1980. It actually made money, which took Kurosawa back from zero to hero. He was back in business!

Eventually. It took another five years for Ran to get off the ground, in which time the septuagenarian director had ample time to storyboard every inch of every frame. With a $11 million budget (and this was when $11 million was a lot of money), he threw out every compromise in search of the biggest of impressions. He built an entire castle on the slopes of Mount Fuji, just so he could burn it down. He painted an entire field of flowers gold, to create a spectacularly surreal night scene, only to cut it in post-production (this scene can be seen in AK, the documentary included in the Blu-ray extras). He had literal armies of extras streaming along the hilltops and into massive battles, all shot from a numbing, alienating distance, with violence and terror reduces to swirling patterns of banners and firework displays of musketry.

From the film’s opening moment, at a fork in the road prefiguring the three-way conflict about to be unleashed, Ran is a triumph of symbolism. The characters are only depicted once sitting in a circle – whole and equal. Every other composition is broken and asymmetrical, daring the viewer to see further portents in the theatrical staging. And when it comes to home video, I would say its time has come. If you can’t catch it in a cinema, then at least most tellies are now big enough to catch all the expansive action, and modern media can capture every pixel. Go on, treat yourself.

Jonathan Clements is the author of Modern Japan: All That Matters. This article first appeared in Geeky Monkey #8, 2016. 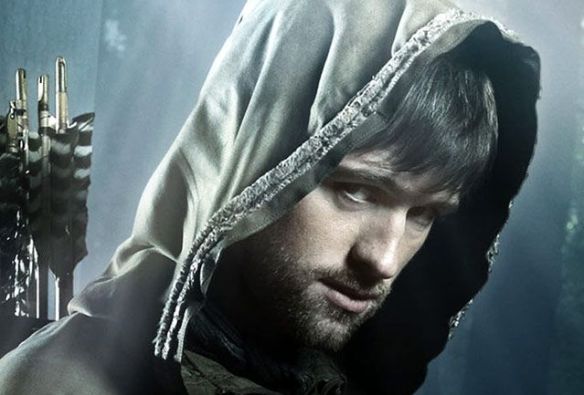 It has always struck me as strange that the stories of Robin Hood should crop up in Europe at the same time as stories of the heroes of the Water Margin in China and of Yoshitsune in Japan. What is it about the late 12th century that suddenly favours stories of noble outlaws opposing dastardly governments? Why is it that for every story of Robin Hood facing Little John on a log across a stream, there is an analogue in the East, like that of Yoshitsune fighting Benkei on the Gojo Bridge?
END_OF_DOCUMENT_TOKEN_TO_BE_REPLACED

The lavishly illustrated Iron Man: The Cinema of Shinya Tsukamoto not only examines the maverick director’s films, but his formative years, fighting with his little brother (who he would eventually shove into a boxing ring in Tokyo Fist), watching anime and Gamera movies. A life of salaried drudgery beckons, until Tsukamoto strikes it lucky with an ultra-violent tale of metallic possession – Tetsuo.
END_OF_DOCUMENT_TOKEN_TO_BE_REPLACED